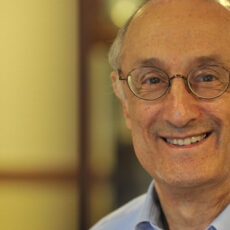 Robert Axelrod’s theoretical and applied work on conflict, evolution of cooperation and the management of complexity has contributed to the development of understanding between people and provided a fresh perspective on the causes and prevention of war.

Axelrod is the Mary Ann and Charles R. Walgreen, Jr. Professor for the Study of Human Understanding, and professor of political science, LSA; and professor of public policy, Ford School. Combining game theory, particularly the prisoner’s dilemma, and theories of evolution, he has shown that cooperative arrangements can evolve. His “The Evolution of Cooperation” (Basic Books, 1984), has been published in 12 languages and received positive reviews in scholarly journals, The New York Times and The Wall Street Journal. His research findings regularly inform the actions of the United Nations, World Bank, U.S. Department of Defense and others, and he has advised parties to the Middle East peace process and officials combating terrorism. Axelrod’s “Harnessing Complexity: Organizational Implications of a Scientific Frontier” (Free Press, 2000), co-authored with Michael Cohen, provides policymakers and business leaders a guide to complexity theory and its practical application. Axelrod has authored or edited seven books and more than 70 papers in publications such as American Economic Review, American Political Science Review, and Nature and Science. He and co-author William Hamilton won the Newcomb Cleveland Prize for the most outstanding paper in Science in 1981.

Axelrod has received the National Academy of Sciences (NAS) Award for Behavioral Research Relevant to the Prevention of Nuclear War. He is a longtime member of the Council on Foreign Affairs, past-president of the American Political Science Association, a MacArthur Prize Fellow, and a member of the NAS, the American Academy of Arts and Sciences and the American Philosophical Society. Axelrod has received the U-M Distinguished Faculty Achievement Award, the Henry Russel Lectureship and an honorary degree from Harvard.