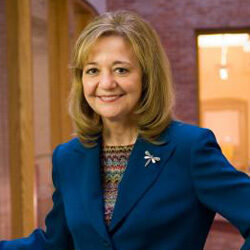 Science advocacy has been a hallmark of Bierbaum’s career, building an international reputation in the fields of science policy and climate science adaptation. She was recently named senior adviser to the Global Commission on Adaptation, led by former United Nations Secretary General Ban Ki-moon.

Bierbaum served on the President’s Council of Advisors on Science and Technology throughout the Obama administration, helping formulate policy on science, technology and innovation. She also ran the first Environment Division of the White House Office of Science and Technology Policy, and serves on the Michigan Climate Action Council and Michigan’s Chronic Wasting Disease Commission.

She also was an important conduit between U-M and the science policy community, helping SEAS secure guest lecturers such as former Vice President Al Gore. Bierbaum has co-authored or contributed to many governmental and intergovernmental reports, including the “World Development Report 2010: Development and Climate Change” and served on several national environmental boards and councils.

“Thirty years ago on my first day in Washington, D.C., I attended a congressional hearing, eager to hear a brilliant discourse between Congress and leading scientists testifying on ozone depletion and climate change,” she said. “The uneasy exchange was sorely disappointing. The lawyers and the scientists spoke past — not to — each other.

“I realized that there was a crying need for translators and assessors of science. If all the good research produced by universities is not ‘accessible,’ it is not useable. I never looked back, and made communication of science a lifelong goal.

“I believe we must all be ‘civic scientists’ and tithe some of our time to improve public understanding and use of best available science. The President’s Award for National and State Leadership shows the value the university places on being the ‘leaders and the best’ everywhere — from the classroom to the statehouse to the White House.”

SEAS Dean Jonathan Overpeck said Bierbaum is a “tremendous asset” to the university and the nation.

“It’s hard to find a person who embodies state and national leadership on climate and natural resources more than Rosina,” he said. “She has served multiple presidents as well as the governor of Michigan. Importantly, she brings her connections, experiences and insights to the University of Michigan, leaving a lasting impression on a long line of students and faculty colleagues.”