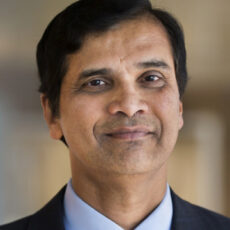 Throughout his career, Sridhar Kota has worked to bridge the gap between theory and practice in engineering research and education, accelerating the translation of academic research to commercialization as president of his own company and through his teaching and public service.

A member of the CoE since 1987, Kota has pioneered a new paradigm in mechanical design called distributed compliance that eliminates joints, reduces cost, and improves reliability. In 2001, he founded FlexSys Inc. to bring this technology, including his variable geometry airfoil FlexFoil to market. FlexFoil reconfigures an aircraft’s wing in flight to maximize performance, saving fuel and reducing noise.

Kota holds 25 patents and licenses. He has published more than 65 journal articles, 150 conference papers and has co-authored a textbook. He orchestrated and taught U-M’s first interdisciplinary design course and has taught the Design for Manufacturability course for students and practicing engineers since 1990. He has advised 22 Ph.D. graduates and several hundred graduate and undergraduate student mechanical engineering design projects.