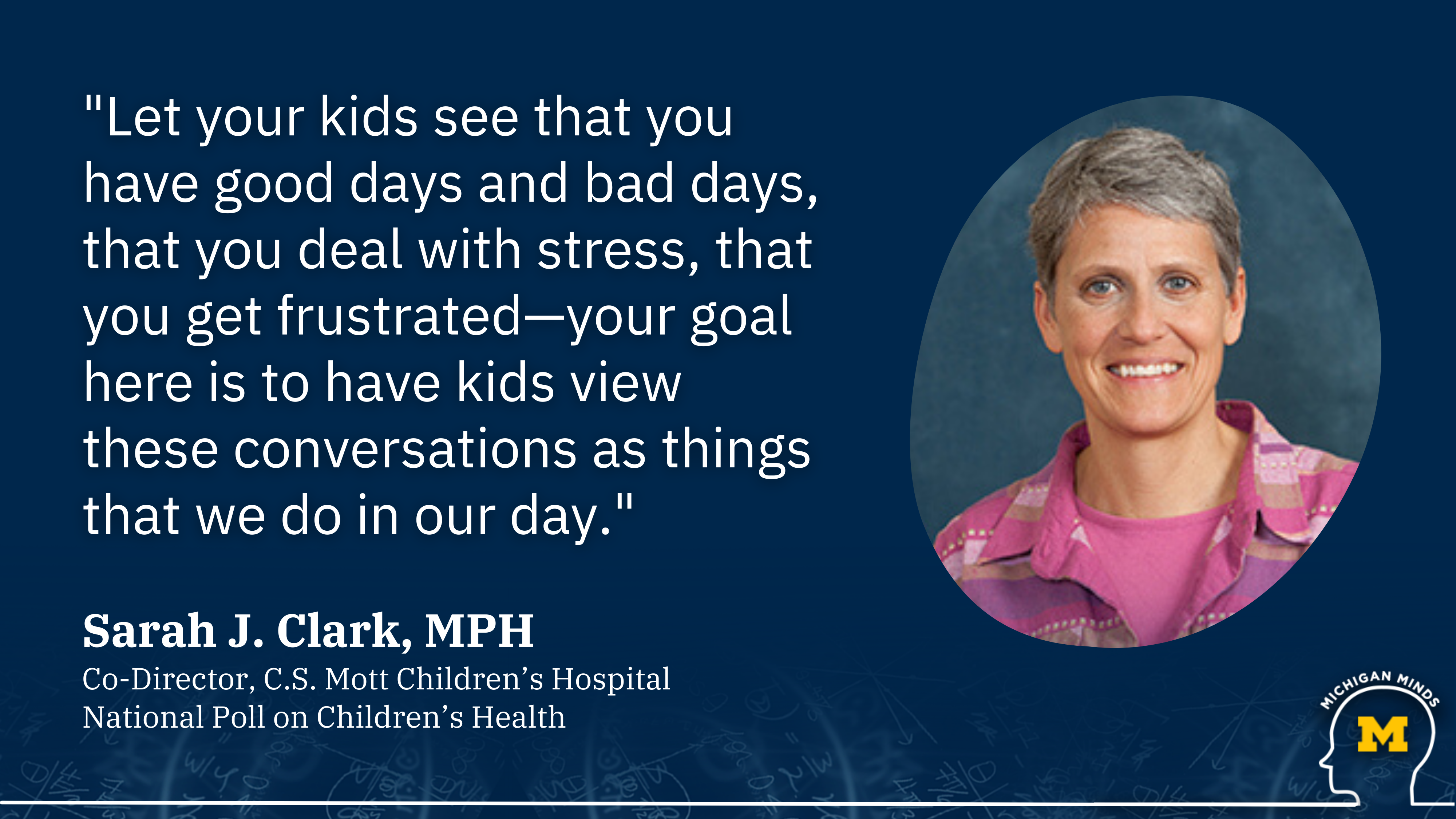 Sarah Clark, MPH, joins this episode of Michigan Minds to talk about adolescent mental health concerns and vision. Clark is a research scientist in the Department of Pediatrics at Michigan Medicine, and a member of the Child Health Evaluation and Research Center (CHEAR). She also serves as co-director of the C.S. Mott Children’s Hospital National Poll on Children’s Health.

Mott has been polling a national sample of parents about a wide range of child health topics since 2007. Each month, the Mott poll publishes new research on a variety of topics regarding children’s health and well-being. This past March, the Mott Poll surveyed parents of children ages 11-18 about their views on mental health concerns in adolescents. Clark explains the many ways in which parents recognize and address mental health concerns, including talking with the child’s primary health care provider, school, peers or with other family members.

“The upshot of what we heard in those findings was that most parents think that recognizing a mental health concern is likely going to happen within the family. But here’s the issue—one of the issues—we ask parents to identify warning signs of a possible mental health concern, and their awareness ranged from 49 percent to 65 percent for any individual sign. And there were one in six parents who didn’t get any of the signs right.”

The poll identified a knowledge gap between what  parents should be looking for and what they are in fact recognizing, including the early warning signs that may signal a mental health concern. She also notes that parents say it can be a challenge to differentiate potential mental health issues from the normal attitudes and behaviors of an adolescent who is maturing and becoming more independent.

The Mott Poll also found that only a quarter of parents thought their adolescent would definitely talk with them about a possible mental health issue. Clark offers strategies that parents can use to create a safe and comfortable environment for their children to talk about mental health concerns.

The Mott Poll’s July report asked parents about their children’s vision, and found that only half of parents recognize that screen time can have a major impact on eye health. In addition to screen time, Clark says, “up-close time”—which includes reading books and doing homework—has also increased for many children. The rise in both screen and up-close time is associated with an increased risk of nearsightedness.

Clark says that the recommendation to reduce screen time can be paired with the suggestion to get involved in other activities, in an effort to live a healthier lifestyle. But she emphasizes that vision health is also a critically important component of limiting screen time.

“Sometimes screen time is presented in terms of, we want kids to be doing other healthy activities—so, it presents screen time as a sort of a risk for overweight or obesity, or influencing sedentary behavior. Sometimes they present limiting screen time as a way to ward off problems with attention span or things like that. I think sometimes the pediatricians forget to talk about screen time as a risk factor for future vision problems.”

Spending time outdoors themselves, whether that be walking or exercising, or just sitting and relaxing, is one way that parents can ensure their children’s eye health. Wearing sunglasses or a hat when outdoors is recommended to reduce risk of damage. During screen time, Clark says that wearing blue-light filter glasses can help reduce strain on the eye.

“There’s something about being outside and having the eyes benefit from that wide open space, from the distance viewing that they have, that really ends up having a protective effect against developing nearsightedness. It’s kind of an exciting new area of research, and it’s great when the solution is something that’s really easy to do.”

© 2023 Regents of the University of Michigan