In this episode of Michigan Minds, Dr. Erica Marsh, MD, MSCI, FACOG, associate professor at Michigan Medicine, discusses health care hesitancy among Black patients and medical professionals within the Black community and talks about the importance of examining issues of racial and ethnic disparities within health care.

Marsh focuses on the science and research behind health disparities and what medical professionals should do to alleviate these inequalities.

To this end, she also talks about her work on Precision Health at U-M’s Health Disparities Task Force.

“Michigan Medicine is one of the most outstanding academic medical centers in the country. We are a high-volume, high-quality medical center, and we’ve had a lot of success with Precision Health thus far in terms of numbers. I think moving [precision health research] to the next level includes not just looking at the raw numbers themselves, but looking at what’s behind the numbers and who is included in the numbers,” she says. 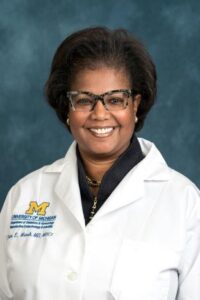 “The thinking was that they [Health Disparities Task Force] would reach out to faculty and researchers who were engaged in research and care in diverse communities to see if there were things that they could do to change the trajectory of the pool somewhat.

“They want to have a diversity that’s reflective of the state of Michigan. But I think the ultimate goal is to have a cohort that has enough diversity to answer, really, any question that we want to ask from a precision medicine or precision health perspective on the US population.”

Marsh, whose expertise includes infertility, uterine fibroids, abnormal uterine bleeding, PCOS and ovarian reserve, amenorrhea, and irregular periods, adds that as providers and clinicians, they hope to incorporate active and intentional listening models to understand patients’ concerns, fears, and hopes for a given experience.

“There’s clearly something broken in the system when we look at issues around maternal mortality in the African-American community. Some fixes will be quite complicated—they may involve translational research or research that may take years to find answers. Still, low-hanging fruit: one thing that we can do today is to listen a little better, a little harder, a little more intentionally to women as they speak to us, share with us, and make sure we’re hearing them; and make sure we’re validating what they’re sharing with us. I think that’s a place that any provider can start now,” Marsh says.

“I think there’s a tremendous amount going on, that starts at the one-on-one interaction level and moving up to the level of the system. One of the things that we’ve learned in medicine and certainly, particularly in my field—which is obstetrics and gynecology—[each field] deals with its own set of very significant disparities. When we look at maternal mortality issues, for example, Black women are the community that’s most disproportionately dying in childbirth in the United States. There is this sense that patients aren’t being listened to, that they’re not being heard.”

Marsh notes that the Medical School and Michigan Medicine have several initiatives and studies that focus on issues around hesitancy with health care, making sure that vaccine access is equitable, and getting people the information they need to make informed decisions.

She emphasizes the importance of understanding women in the Black community, mostly young Black mothers. According to the Centers for Disease Control, Black women, as well as American Indian and Alaska Native (AI/AN) women, are two to three times more likely to die from pregnancy-related causes than white women.

“I think racism manifests itself in many ways. I think a lot of it is behavioral in how Black women are treated when they engage with the health system. I think some of it manifests itself in our own health; the principle of weathering, if you will, the principle of growing up Black in a society that regularly tells you that your life matters less.”

“That manifests itself pathophysiologically,” she says. “Does it result in higher blood pressure? Does it result and manifest itself in a higher risk of diabetes, stroke? I can’t speak to the specifics, but I think there is a very real physiologic aspect of dealing with racism and the trauma of racism day in and day out as a Black person in the United States.”

Marsh also talks about the town hall meetings sponsored by the Michigan Institute for Clinical & Health Research (MICHR) and the Clinical and Translational Science Award at the University of Michigan (CTSA). The meetings involve medical and community experts taking questions and providing up-to-date perspectives and information on COVID vaccines, and other questions and concerns for community members.

“It’s really interesting. I think before the vaccine actually came out, particularly last fall, there was a huge amount of hesitancy being seen across communities, but certainly disproportionately within the Black community and, to some extent, in the Hispanic community as well. Now that the vaccine has become available, we’re seeing communities and individuals more open to it than we would have expected based on what the data reflected last fall, which is exciting.”

She also notes that the challenge to the vaccination program is not the vaccine itself but the people having problems having access to it. Marsh says this is not just a local problem but a national and even global issue.

“We need to strike while the iron is hot. While we have people saying, ‘You know what? I am willing to get vaccinated. Where do I go get vaccinated?’ and I just think it’s really important that we’re there and ready to say, thank you for making that choice. We have the vaccine for you. Come and get it.”

To learn more about Precision Health at the University of Michigan, its workgroups, and its current research, visit the website: precisionhealth.umich.edu.