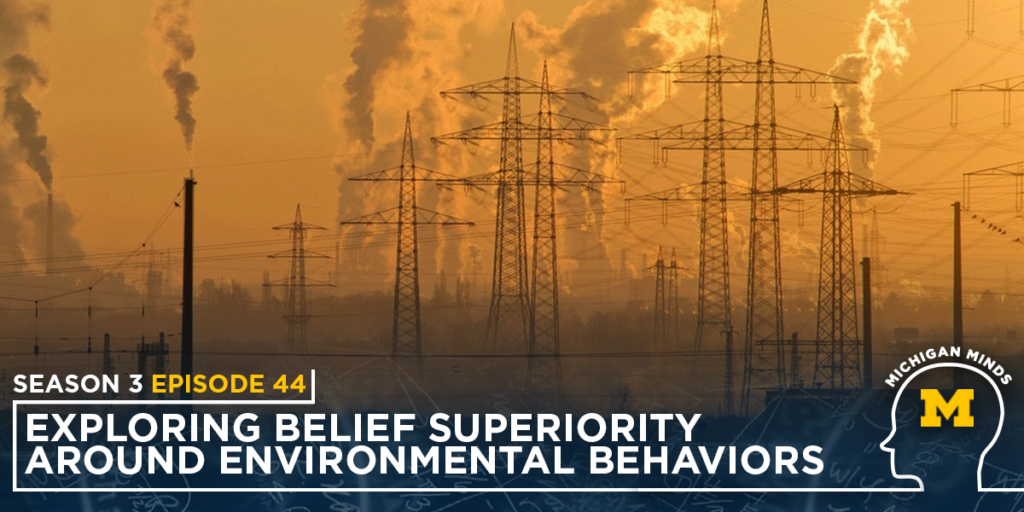 In this episode of Michigan Minds, Ford School of Public Policy assistant professor Kaitlin Raimi explains her research on how people compare their own beliefs and behaviors to those of others, specifically regarding climate change and environmental behaviors.

Raimi discusses her work that looks at the impact of being told how your carbon footprint compares to your peers’ might motivate you to reduce your footprint. She also looks at how people compare their own beliefs to those of others.

“I do a lot of work on what I call belief superiority — people’s belief that their own opinions are more objectively correct than everyone else’s and superior to everyone else’s, and what that means for our willingness to listen or work across the aisle, or consider alternative views,” she says.

She notes that climate change is a complex issue and one that is open to misunderstandings and misinformation.

Raimi emphasizes the importance of looking through the communications lens and participating in peer-to-peer communication. She says that individuals who hold more extreme positions on a given topic are more likely to engage in selective attention and ignore information that challenges their point of view.

“Luckily,” says Raimi, “there seems to be a fairly small proportion of people out there who think that their views are highly superior. I think if you’re trying to persuade groups of people, you need to pick your battles and not worry about those people who hold their beliefs with more superiority, because it’s very hard to change those people.”

Her advice for those who are worried about climate change is to talk about it with friends, neighbors, and family members. “They may be under the impression that you don’t care because you haven’t talked about it and we can dispel that particular myth because it turns out a lot of people really do care and are really concerned.”

Learn more from Raimi in this episode of Michigan Minds