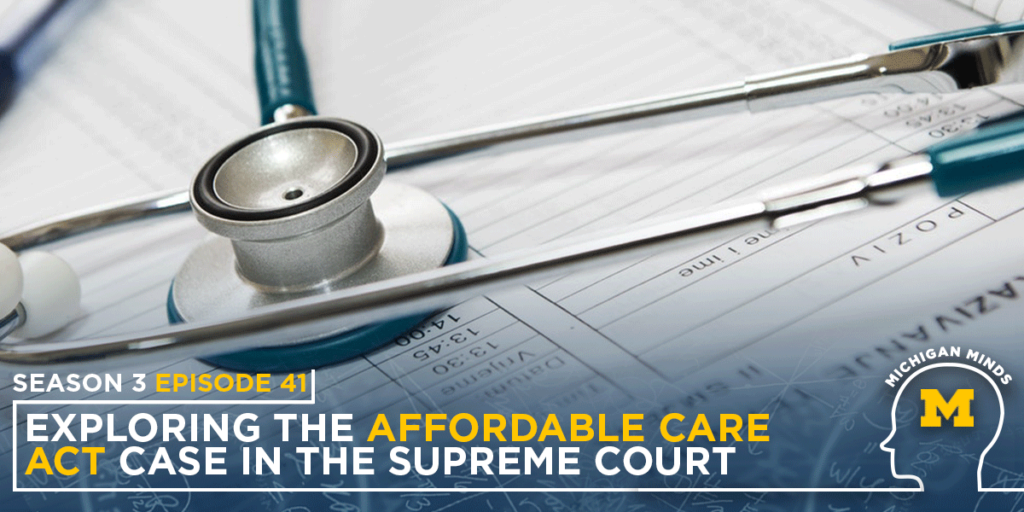 Between concerns about the COVID-19 pandemic and policy questions raised in the presidential election, health care has been a major topic of discussion throughout 2020. Earlier this month, the Supreme Court heard a case about the Affordable Care Act brought to the court by the attorneys general in 20 Republican-led states across the US. In this episode of Michigan Minds, John Ayanian, MD, MPP, director of the U-M Institute for Healthcare Policy and Innovation, explains the details of the case and explores possible outcomes as the public waits for a ruling to come in 2021.

Ayanian provides background information on the ACA, outlines  the arguments on both sides, and explains that nothing changes until a decision is made.

“This case began back in 2018 after the Congress eliminated the tax penalty that was associated with the individual mandate,” Ayanian says. “We expect that the Supreme Court will issue a ruling probably near the end of its term in June of 2021 on the issues brought forward by this case.The Affordable Care Act in its current form stands until the Supreme Court issues its final ruling.”

“The Supreme Court could declare portions of the Affordable Care Act unconstitutional, but it really does not have the power to decide what a replacement should look like. That would be up to Congress and the president, depending on how the Supreme Court decision played out,” he says.

Ayanian adds that 20 to 25 million Americans have gained coverage through the ACA marketplaces and Medicaid expansion, and those individuals would be impacted if the law is overturned.  The case could also affect young adults who have been able to stay on their family’s health insurance plans through age 26 and Americans with preexisting conditions who have been guaranteed coverage, which Ayanaian says is likely over 100  million individuals.

“In the coming weeks, it will be key to watch what happens with those Georgia runoff elections in early January, and then how control of the Senate is determined by those elections going forward with the new administration and the new Congress in January of 2021,” he says.

Ayanian adds that it’s important for Americans as voters and citizens to pay attention to the debates about the ACA and to make their opinions known to their legislative representatives.

Learn more in this episode of Michigan Minds