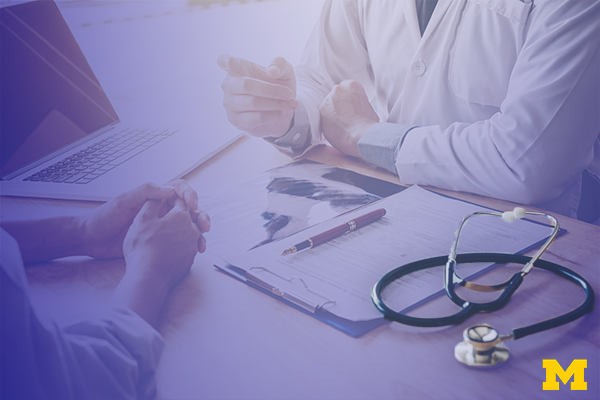 This episode of Michigan Minds is part of a special series from University of Michigan Public Engagement & Impact in collaboration with the Office of the Vice President for Research on firearm injury prevention.

As part of the Firearm Injury Prevention Research Series, Jason Goldstick, PhD,—professor of emergency medicine and director of the Statistics and Methods Section of the research core of the U-M Injury Prevention Center—joins this episode of Michigan Minds to discuss his research in injury prevention, substance use, and violence.

His focus on youth is essential to the work. “Something that we do know about firearms and violence is that youth are at much higher risk for interpersonal firearm violence fatal injuries,” he says. ”The interpersonal violence is really the focus of my project. For older Americans and especially those in rural areas, there’s a much higher risk for self-directed firearm injuries and that actually comprises the majority of firearm deaths in the United States annually.”

Through data analysis, Goldstick is working to efficiently allocate resources to those at the highest risk. He recently received a grant from the Centers for Disease Control and Prevention to use cutting-edge machine learning methods to assess young peoples’ risk for firearm violence so prevention resources can be deployed.

“With firearm violence research, the missing prerequisite is an accurate gauge of risk, which is really the purpose of the project,” he says. “We conducted a prospective longitudinal study and we used the data there, a large candidate set of predictors, to drive a classifier for future firearm violence that performs well out of sample, using cross validation and also using this field predictors as possible.

“From those results, you can create a risk score that can be used in clinical practice to quantify a person’s risk for future violence and allocate resources as appropriate.” 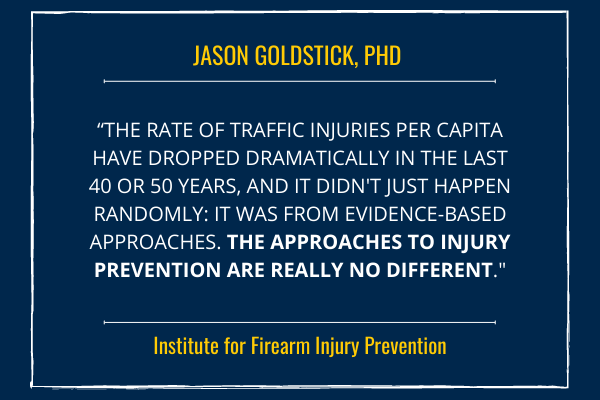 Goldstick also talks about the importance of discussing risk assessment, prevention, and intervention as part of a broader national conversation. He illustrates how strong research infrastructure at the Injury Prevention Center is a large part of collecting evidence and then using it proactively to determine how to create evidence-based approaches.

“The rate of traffic injuries per capita have dropped dramatically in the last 40 or 50 years, and it didn’t just happen randomly: it was from evidence-based approaches. The approaches to injury prevention are really no different,” he says. “You can do a lot of the same things that you do with, for example, traffic injuries: there are no bans on driving or anything like that, there are just measures to make it safer.”