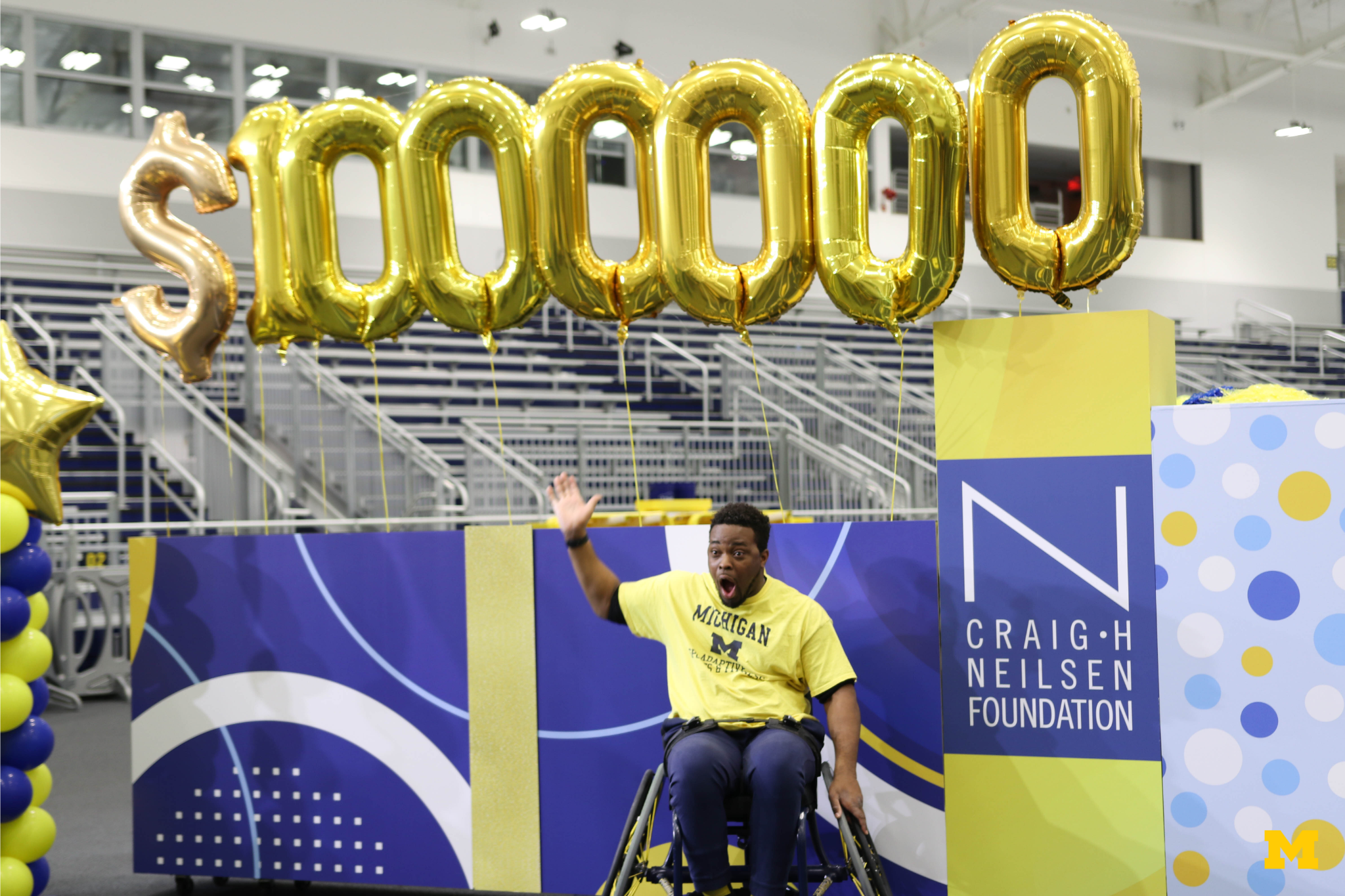 Oluwaferanmi “Feranmi” Okanlami, MD, known as “Dr. O,” was surprised not only by Robin Roberts and Good Morning America with a live segment Thursday morning — but also with being named a recipient of a $1 million award from the Craig H. Neilsen Foundation.

Okanlami’s colleagues, friends, and family members gathered at the Indoor Track and Field facility on the University of Michigan’s campus to surprise him alongside the Good Morning America crew. Waiting quietly while Okanlami finished a practice with the Adaptive Sports & Fitness Program, those in attendance were beyond enthusiastic about the award and delighted with the recognition for Okanlami and the work he does.

“Dr. O’s work is transformative and I couldn’t be more honored to be here and to support him. I look forward to watching what he is able to do with this gift. We are so fortunate to have him in our university community,” said Dean of Students Laura Blake Jones.

Okanlami is an assistant professor of family medicine, physical medicine & rehabilitation, and urology, and U-M’s Director of Student Accessibility and Accommodation Services. Okanlami was born in Nigeria before immigrating to the US at a young age. He attended Stanford University where he also ran Track & Field, serving as captain his last two seasons and achieving Academic All American recognition. He then earned his MD from the University of Michigan before matching into Orthopedic Surgery at Yale. At the beginning of his third year he experienced a spinal cord injury, paralyzing him from the chest down. After two surgeries and intense rehabilitation, he experienced some return of motor function. Okanlami navigates the world as a proud wheelchair user, managing the other long term sequelae of an incomplete cervical spinal cord injury. He strives to make his work and his life a demonstration that disability is not inability, and focuses his work on advancing diversity, equity, and inclusion broadly.

“It is wonderful to have Good Morning America here to honor and recognize Dr. O and his incredible work to increase access so that everyone can participate in sports,” said Amy St. Amour, Associate Director of Family Medicine Office of Development. “The generous award from the Neilsen Foundation will have an enormous impact on the visibility of the Adaptive Sports & Fitness Program.”

The Craig H. Neilsen Foundation is the largest private funder of spinal cord injury research, rehabilitation, clinical training, and programmatic support in the United States and Canada. The Foundation is dedicated to a future where individuals with spinal cord injuries live full and productive lives as active participants in their communities.

“The Neilsen Foundation is honored to award Feranmi the 2022 Visionary Prize, said Kym Eisner, Executive Director of the Neilsen Foundation. “Feranmi has spearheaded efforts toward creating a more inclusive and accessible health care system and has been an advocate for adaptive athletics at the University of Michigan. We are thrilled to celebrate his impact on the world of SCI.”

Okanlami, who thought that the interview he was preparing for was with a local television station, was excited and in disbelief as Roberts rode onto the track on a golf cart, followed by his son, his mother, his coworkers, and others who were there to celebrate his impact and the award.

During the segment, Roberts described Okanlami’s efforts as “changing the narrative to show that disability doesn’t mean inability.” She also emphasized his mission to advocate for students with disabilities and make adaptive sports accessible for all.

Okanlami immediately said that the growth of the Adaptive Sports & Fitness Program has been a tremendous team effort. “They all put in so much work to make this program happen. This is not a ‘me’ thing, this is an ‘us’ thing,” he said, gesturing to everyone standing with him during the segment.

Erik Robeznieks, Assistant Director of the Adaptive Sports & Fitness Program, and one of the lead coordinators of the surprise Thursday, was proud as he watched Okanlami react to the many monumental moments of the morning.

“Dr. O’s humility as a leader — we heard it this morning live when he was talking about “the team, the team, the team”—he recognizes that it really takes a village to grow this program at the university and leans on those around him to empower him,” Robeznieks said  “He has such a strong, powerful, and vivid vision of what this can be at the University of Michigan that you can’t help but buy into what he is saying, and you can’t help but believe that this could all be achieved here. So working with him over the past few years, we have come to see this program being built piece by piece to now support competitive sports and recreational sports, programming in local clinics, programming in local schools, and more. Everything that he said he wanted to do, we are doing.”

Roberts asked Okanlami during the segment about his trademark phrase “disabusing disability.”

“Disabusing disability was a trademark that I coined a couple years ago to try to demonstrate that disability doesn’t mean inability,” he said.

“Until I started to live my life on the other side of the stethoscope with my spinal cord injury, I didn’t realize how ableist our world was; how inaccessible our world was. I was unintentionally complacent in this world of ableism. And I met all of these people with disabilities who have been doing amazing things…so this is trying to demonstrate, just as one piece of this puzzle, that disability is not inability. Disability is a fabric in the world of diversity that just makes us all have our unique contributions.”

Robert Ernst, MD, U-M Chief Health Officer,said that it was great to see Good Morning America on campus to help recognize Okanlami’s accomplishments at the University of Michigan.

“His commitment to diversity and inclusion is remarkable. The Adaptive Sports & Fitness Program is taking off under his leadership. I can’t imagine anyone more passionate and purpose-driven than Dr. O. It’s always about the students in the program for him, and it’s amazing that he is being honored for that,” Ernst said.

“Every time I think we hit a high, he throws me something else,” added Okanlami’s mother, Bunmi.

During the segment, Roberts thanked Okanlami and the Adaptive Sports & Fitness Program for the work they are doing. “Instead of being limited based on what we can not, we need to be given the access to show what we can,,” Okanlami said, before leading the group gathered in a loud cheer of “Go Blue!”