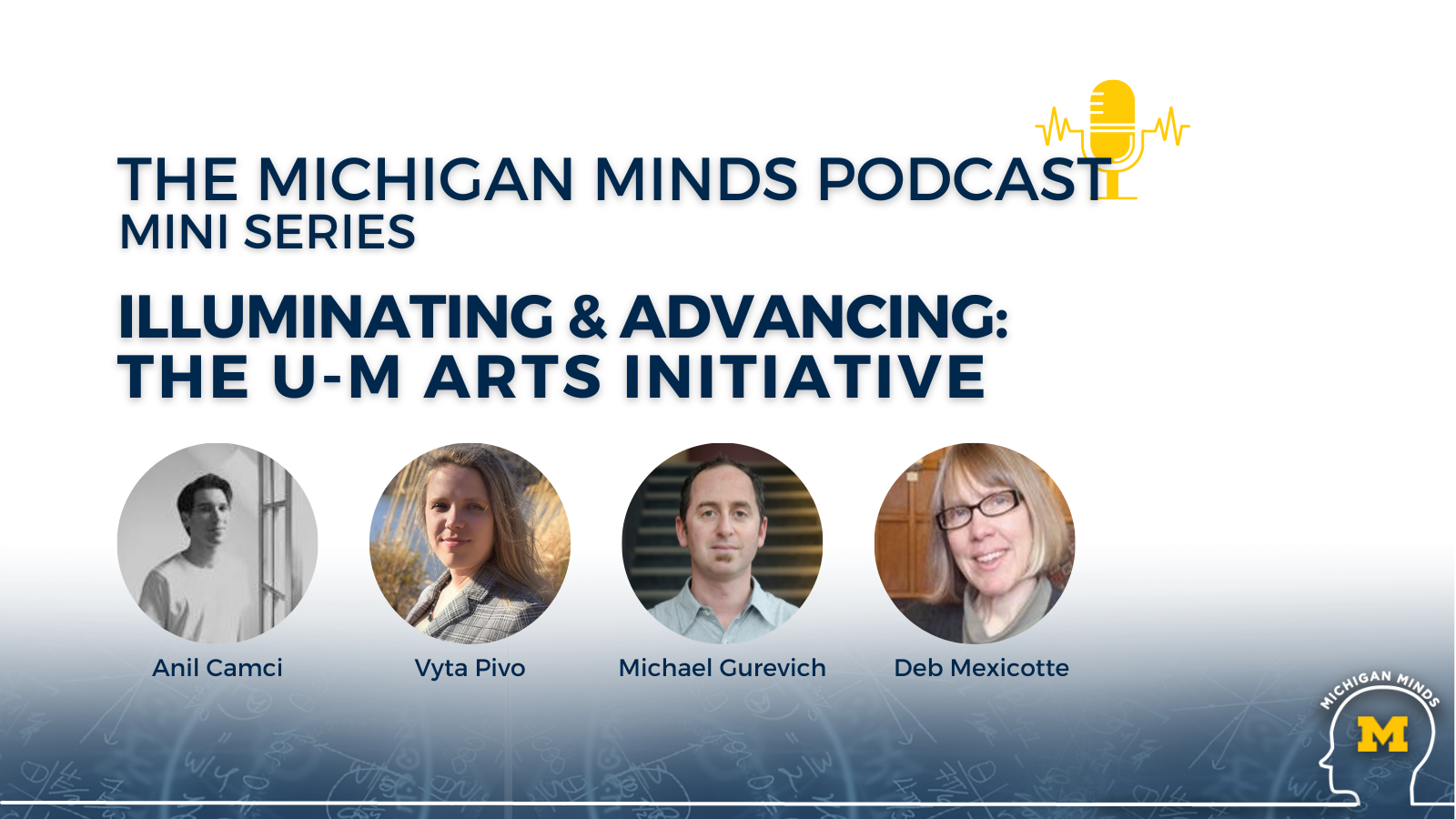 Launched in 2019, the University of Michigan Arts Initiative seeks to illuminate and expand human connections, inspire collaborative creativity, and build a more just and equitable world through the arts while making the arts central to the University’s identity and mission. Through projects, fellowships, and other funding opportunities, the Arts Initiative provides support for faculty, students, and staff to implement programs, projects, and performances that will help to discover, shape, inform, and advance the evolving initiative.

This special series of Michigan Minds features U-M faculty who are leading Arts Initiative pilot projects or as a part of the Public Art & Engagement Fellowship. Learn more and tune in to each episode below:

Virtual reality provides a sensory experience with the help of sight, sound, and touch for an individual—but for U-M assistant professor of performing arts technology Anil Camci, it’s an opportunity to create a more immersive experience for large audiences. Hear him explain his project Bringing Down the Fifth Wall, funded by the U-M Arts initiative.

“The Fifth Wall project started out with the goal of bringing virtual reality music performances to large audiences. To break that down a little further, virtual reality music performance can take several forms. Some of the musical applications we find in VR today are more consumer-facing applications, where anyone could go into VR and play with a musical system in the style of playing a game. But then there are VR performances where an artist or performer goes into VR and leverages this medium as a musical instrument in front of an audience. And when I mention a VR instrument, I don’t mean a virtual violin that you would play in a simulated space. I think that does injustice to both violins and VR.”

Download transcript of A New Era in Virtual Reality Performances

Vyta Pivo, PhD, examines architecture not just as a building but as an urban issue. Pivo is a postdoctoral fellow with the Michigan Society of Fellows and an assistant professor of architecture in the Taubman College of Architecture and Urban Planning. In this episode of Michigan Minds, she describes her goal to reimagine how society thinks about architecture.

“My goal is to expand the purview of architecture and the lens that we have for studying architecture from the building and the site to also include the manufacturing of construction materials, the construction process itself, and also where the demolished buildings go. Through my work, I really show that architectural production is not just an issue of design; It’s really an issue of kind of slavery, of colonialism, of climate change.”

Live music can be experienced in many different ways. Telematic music performance offers a unique way for musicians to play together in real-time while not being in the same physical location. Michael Gurevich, PhD, associate professor of performing arts technology, talks about his Arts Initiative-funded project Visualizing Telematic Performance, some of the experiments undertaken, and how the pandemic impacted the project.

“All of a sudden there’s this real sense of urgency to what we were doing. People came up with creative ways to make music together, to fake playing live. Usually, they would just have a metronome playing and everyone would record themselves to the metronome and then reassemble the parts of the piece later and it was better than not having music for a while, but it doesn’t really capture the magic of live performance. So, this idea of ‘we want to be able to really play with each other for real and have it feel real’ was really timely for this project and it gave it really a sense of urgency and momentum.”

“In the early part of 2020 and even previously, there was a lot of social unrest going on throughout the country and there were a lot of questions about where we were heading as a democracy, how our leadership was responding to the needs of their communities — and arts engine being an interdisciplinary initiative is always looking for ways to leverage the arts engine technology in new ways to bring new insights, new understanding, new expression, and new knowledge to the kinds of things.”