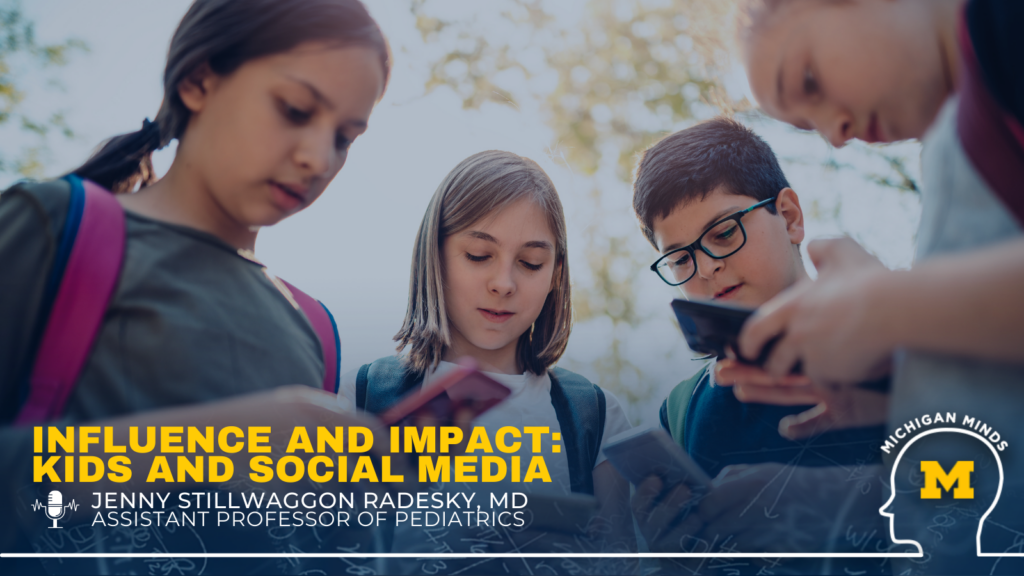 This episode of Michigan Minds features Jenny Radesky, MD, a developmental/behavioral pediatrician and assistant professor at Michigan Medicine. Radesky’s research focuses on how the parent-child relationship and digital media use interact to shape child social-emotional outcomes.

Radesky emphasizes the importance of research surrounding digital media and its influence on youth as it continues to evolve. She also highlights the significance of creating relationships with young adults and children where honest conversations about social media can be had.

“A child’s unique stage of development, like when you’re a tween or teen and you start really caring about how other people think of you, can be so augmented through this platform that suddenly allows you to perform all the time for everyone else, and then you’re rewarded for performing. On top of that, you have filters that are offered to you as the expected thing you’re supposed to do… where it’s almost this expectation, you have to beautify yourself before you post yourself. And that contrast, we didn’t have that before [Instagram] came, so that’s going to augment some of this negative self image.”

Radesky provides insight into how the pandemic affected kids’ use of social media platforms. She explains the results of a survey she conducted with parents of elementary school children on how many children started social media accounts before they otherwise would have before the COVID-19 pandemic just to keep in touch with friends. About a third of parents whose children were aged 5-10 said their kids started accounts before they expected they would. Radesky also extends her analysis on the negative impacts social media had on children who created accounts at an early age.

“There was a recent study that came out just a month or two ago that looked at tweens, so 9, 10 and 11-year olds, who had started Instagram or Snapchat accounts by lying about their age. The study found that those children had more problematic media use down the line, meaning a few years later, they didn’t feel as much control over it, or they may have argued with their family more about it.”

Radesky recently published an article for the American Academy of Pediatrics (AAP) that highlights topics, including the leaked Facebook documents that took place in September, and research findings that outline how Instagram contributed to teen girls’ negative thoughts about their body image and thoughts of self-harm after using the app. She discusses how app-designers could create or contribute to a more positive experience for youth and those who are more vulnerable, adjusting the algorithms to not elevate “dangerous content” but instead shift the defaults to show more positive and aspirational content.

As the podcast closes, Radesky offers parents and guardians strategies to keep in mind when advising their children on digital and social media use. She suggests that parents think of themselves as more of a mentor that offers guidance and support to their children, instead of approaching social media use in a more authoritative way.  She also notes how crucial it is to initiate healthy conversations around social media, as everyone is figuring out and navigating these rapidly changing digital ecosystems together.

“My guidance to parents is, it’s a bit of a Wild West out there — you probably see it in your own social media feeds. So try to be a mentor to help your child build their own guardrails around what they’re willing to click on who they follow — watch with them or play with them, so you understand their digital world, and if you see something that seems inappropriate… talk about it with kids, don’t just criticize.”