Making an Impact: Professor Jason De León brings the life-and-death stories of migrants to the public

“It really didn’t make sense if the only place people could see this work was in academic journals.” — Jason De León, associate professor of anthropology.

U-M anthropologist Jason De León went from studying ancient civilizations to researching one of the most controversial topics of the decade:  undocumented migration along the U.S. southern border.

It’s a move that drew more attention to his work and inexorably led him to become a more public scholar, sharing his findings with a wide audience to help inform and elevate an important public discussion.

De León, a 2017 MacArthur Fellow, shines a light on the real-life effects of immigration policy by applying anthropology and forensic science. He tells the stories of migrants through the items left behind by those making the journey—and, sometimes, the bodies of those who didn’t survive it.

Media interviews, public speeches, and social media weren’t roles he considered or even embraced when he began this line of study nearly a decade ago. But he now finds them indispensable.

“My thinking at the time was still really about journal articles and a book,” says De León, associate professor of anthropology. “Over time, I realized people were interested in this work, much more than in what I was doing previously. I realized I had to be better at communicating my research to the public. I learned how to be more savvy in media interviews, how to write in a more accessible way, and how to take advantage of all these different platforms to tell this story.

“Part of it was because I was asked. But I figured since I have this opportunity I should take it seriously. It really didn’t make sense if the only place people could see this work was in academic journals.”

De León has been featured in the New York Times, National Public Radio, the Washington Post, National Geographic, and many other news outlets. He has given public speeches across the country and written the book The Land of Open Graves. De León is also active on Twitter, with nearly 3,000 followers.

From the ancient to the contemporary

De León shifted his focus from the ancient to the contemporary during a visit to Mexico, after talking with local residents contracted to help with excavations he was working on. He listened to many stories about clandestine border crossings and arduous journeys.

“It occured to me that they must be leaving things behind and that would be a way to study this modern phenomenon,” he says. “We have this idea that archaeology is only concerned with ancient people. But in reality, it’s simply about studying the past from the things we leave behind. That could tell us about yesterday, last week, or 10,000 years ago.” 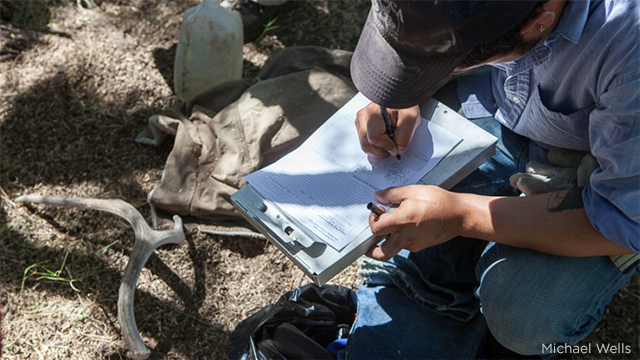 De León worked to build trust with a wide range of people — migrants, humanitarian groups, and Border Patrol agents. He found many willing to share their stories.

“My goal is for people to see and think about the humanity instead of the numbers,” he says. “Imagine the things you’d carry to survive a journey on foot over rough country. Food, water, clothing. We also find things that would give you comfort — family photos and bibles. We also find bloody socks, first aid equipment, and sometimes dead bodies. All of these things speak to the physical and emotional difficulties people experience.”

He began the Undocumented Migrant Project as a long-term, interdisciplinary study to document the realities of people who migrate from Mexico to the United States.

Since De León was studying a hot-button topic, requests for media interviews and public speeches soon started trickling in. And the more he did it, the more he saw the value and worked to get better at it.

“I was kind of forced into it in a way, because they came to me,” he said. “I put a lot of effort into my talks. If I dropped dead tomorrow, what will people say about my last speech? Was I engaged? And building the speaking part led to changing the way I looked at writing my book and other media.”

De León studied other public scholars and tried to match his skills to what he saw them doing.

“There are books, op-eds, interviews, TV, videos, social media…so you have to be realistic,” he said, “You can’t do everything. So pick what works best for you and your field.”

He became more of an advocate of bringing academic research and expertise to the public forum.

“This is a crisis and we as a society need to know more about it. So If I can use different media to help do that, I will,” he said. “And we need more scholars to be public. I can’t stand when I watch TV and see a supposed expert on a topic who isn’t really an expert, but is good on camera. The stakes are too high to allow non-experts to become the voices of our fields.”

Having a public profile means criticism will follow, but De León says that can even be valuable.

“I never got hate mail before I started doing this, so that was new,” he says. “But I tried to understand people who are angered by what I do or say. Those are learning moments. Why are they reacting this way? Why do they see it so differently? It helped me be more empathetic, and I really do think about them when I’m presenting my work. We need a nuanced, shared understanding of issues.”

With the public engagement experience under his belt, De León sees less of a separation between his public-facing work and his academic research. Each informs the other.

“It took a long time for me to realize this, but it’s hard to be two people, this scholar and this public speaker,” he said. “Too many people, including me, go into this thinking about public outreach as a separate thing. I don’t see a boundary. The research I do is in concert with the public outreach. I’m not going to do an academic book, then do media for the publicity. I’m writing a book with academic rigor that’s digestible for anyone.”