Navigating Social Media as a Scholar 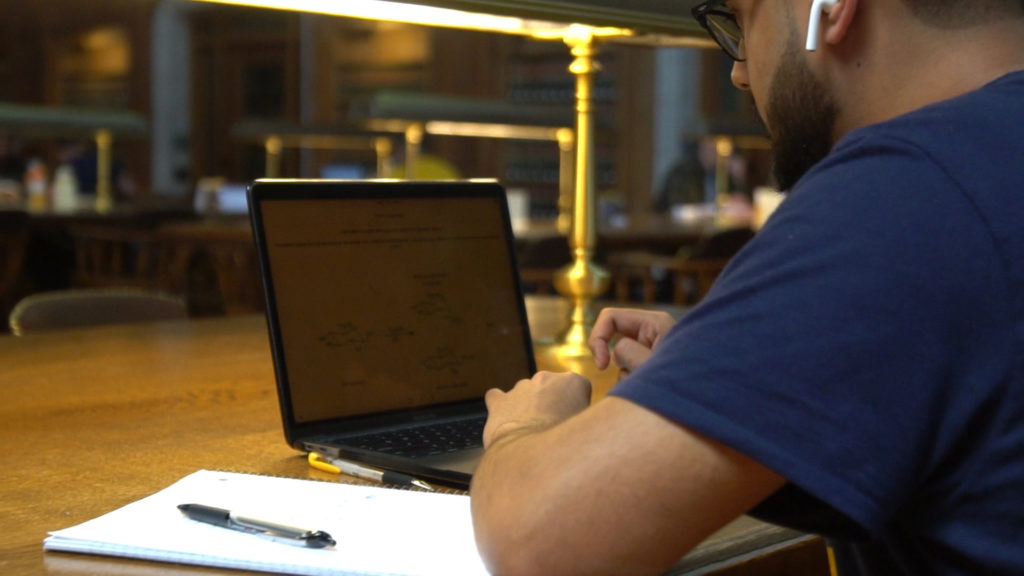 With all the demands on an academic, where can you find the time to widely communicate and promote your work and ideas?

Social media can be the perfect place to raise your public profile and help inform discussions. When used correctly, platforms like Twitter and Facebook can be effective platforms  to create engaged networks of people in your field, reach new audiences, and learn about new research and ideas.

There’s no set playbook and no one-size-fits-all approach. But some U-M scholars have led by example, finding different ways to use social media for their own goals without overspending limited time.

“It’s a form of social discourse, so your best resources are your common sense and observation of others,” says Justin Wolfers, professor of economics and public policy who has a Twitter following of about 147,000.

Like a good researcher, Wolfers began his social media journey with an experiment — he flipped a coin each day to see if he’d go on Twitter. Heads yes, tails no. He soon found he missed Twitter on days the coin came up tails.

“I just realized it was a great way to find important things to read and to share what I really liked with others,” he says. “It was an indispensable tool for me.” 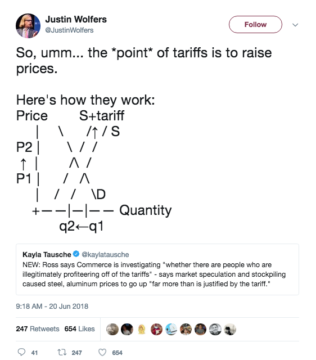 Wolfers also found it easier to reach journalists, especially those working on economics stories, than using the phone or email.

“Instead of taking 10 calls from journalists in a day I can reach 500 of them via Twitter and they can, and do, quote me from that,” he says. “I think it’s really important to inform public debates on economic issues, and this is a very useful form of outreach. I’ll spend all of four or five minutes on a tweet and journalists will spend the rest of the day learning about what I said. It’s efficient and gets journalists and other people more involved in economic policy.”

Going public with analysis and opinion comes with some costs. Personal attacks appear and trolls sometimes try to derail discussions. That can make Twitter a more difficult place to engage for some, especially women and minorities, he says.

“At the end of the day what matters to me is improving the public policy debate, but I’m willing to weather the cost, which is real,” he says. “It’s not much different from the skill you need to get through school. Mean kids say awful things and grownups tell you to tune it out. That’s the right advice, but as human beings it’s not that easy.”

Sarita Yardi Schoenebeck, assistant professor of information, is a scholar of social media. She researches online behavior, including harassment, and how families use social media.

She joined Twitter about 11 years ago when she was a graduate student, and Facebook not long after. She found Twitter a good medium for peer support and development, and for keeping up with colleagues as they took new positions and published new research. 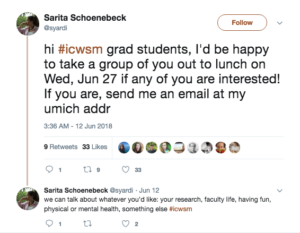 “The reason for that is Facebook is a little more locked down in terms of who can see my posts,” Schoenebeck says. “I post to friends only. On Twitter you’re either public or private. So I’m far less personal on Twitter. But on Twitter you can really cultivate an academic community. It’s great for seeking out and giving social support, and you can share accomplishments and get feedback on work you’re doing.”

Schoenebeck usually veers away from political debates and focuses her outreach on ways to support student mental health, and how to be a good student advisor and good member of the academic community.

“Those are the topics I’ve found that generate productive conversation,” she says. “Other types of debates tend to go off the rails quickly and I don’t particularly enjoy that. But I respect people who deal with it and advocate for their positions. It’s admirable to be an outspoken advocate. It’s just not for everyone.”

When the Arab Spring was in full swing, Juan Cole knew social media would play a role in researching the movement and its aftermath. The professor of history, who studies the Middle East and Islam, was an early adopter of blogging and social media.

Cole earned his master’s degree from The American University in Cairo and felt a personal as well as professional connection to the events.

“Part of that movement was blogging and I could follow people in the movement,” he says. “Some of them would follow me and I could send them direct messages. Twitter is wonderful for reaching people who are otherwise hard to get ahold of.”

Many of the sources in his book, The New Arabs, were contacts made from the Internet and social media.

“I don’t think that would have been possible in the same way without the Internet,” he says. “It allowed me to directly contact the principals who could tell me what was really going on. Twitter and Facebook were both very useful in that regard. I’ve met literally hundreds of people on social media. They’ll follow me and then we’ll meet in person when I give a talk somewhere.” 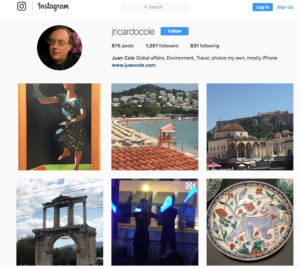 Cole initially only used Twitter to automatically push out new posts on his blog, Informed Comment. Then he noticed one day he had about 10,000 Twitter followers just from that activity.

“I thought I should use it more after that,” he says. “I was using Facebook to interact with journalists because they were early adopters of Facebook. But I ended up liking Twitter a little better. It’s easier to interact with tens of thousands of people.”

“My blog readers aren’t necessarily interested in my weekend in Singapore but the pictures are appreciated on Instagram, so I try to put up a photo a day,” he says.

Since he writes about, and comments on, hot-button topics he does experience negative feedback. But he’s learned to pick and choose whom he argues with and when, making use of the platforms’ tools.

“If I see people not posting in good faith, I just block them,” he says. “Very simple. I’ve blocked a lot of people and I’m known for that. So my Twitter feed is pretty quiet despite what I write about.”