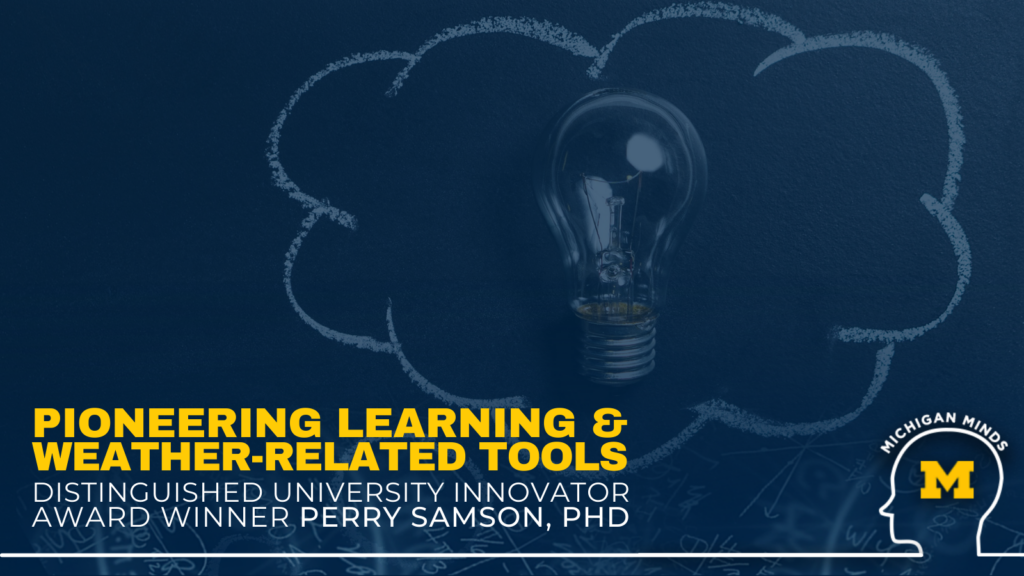 In this episode of Michigan Minds, U-M Arthur F. Thurnau Professor of climate and space sciences and of engineering and 2021 Distinguished University Innovator Award winner Perry Samson, PhD, discusses the pioneering learning and weather-related tools and technologies he helped develop and the successful companies he launched around them.

Samson talks about the honor of receiving the award, and discusses some of the tools and innovations he has created, including Weather Underground, Blue Skies, LectureTools, and LearningClues, among others. Samson emphasizes that he didn’t do any of it alone, and that Michigan students have been integral every step of the way.

“All of the innovations that I’m associated with are largely the work of students from the University of Michigan. I like to say that I think I have one of the best jobs on campus. [Part] one, I get paid to talk about the weather. How good is that? And then part two is just the opportunity to throw half-baked ideas into the sea of amazing students who run with these ideas. And they don’t all work, but my gosh, some of them do,” he says.

The Distinguished University Innovator Award honors faculty members who have developed transformative ideas, processes or technologies and shepherded them to market. Samson received the award October 6 at a virtual event.

Samson has been a member of the U-M faculty for 43 years and has conducted research on air quality, acid rain, the ozone, and more. He’s dedicated considerable time to thinking of ways to teach in a more accessible manner, which he says led to a whole new area of enterprise: research on how students learn—in particular, how they learn climate science.

“Virtually everything that I’ve been developing in terms of innovation has been based on a need that I had in the classroom,” he says, adding that finding new ways to engage with students has always been an important focus of his projects.