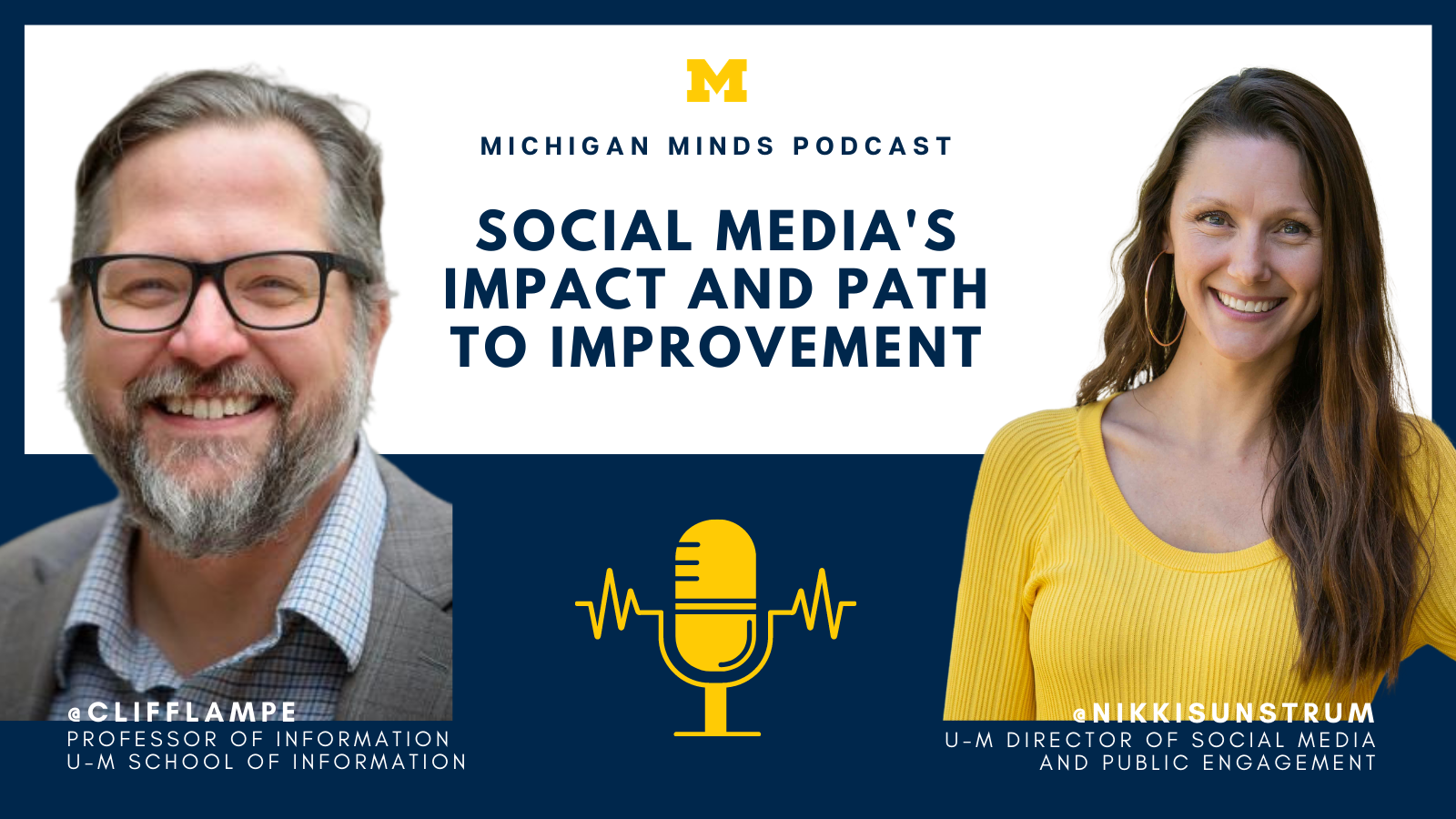 Lampe has been studying social media for more than 20 years, long before billions of people had accounts, and online communities were known only as ‘bulletin boards and online forums.’ His research focuses on a variety of areas including misinformation and how to make platforms more productive and equitable for all users. Their conversation occurred just before Social Media Day, June 30, which has been observed for 11 years now. Lampe reflects on how social media has evolved and offers some predictions for how it must continue to change for the health of its users and global society.

“There’s been a pretty stable number over the past few years of 75-80% of the US internet-using population using a site like Facebook, 30% use Instagram, 25% use Twitter. It’s become part of everyday life,” Lampe says.

“I think that the biggest change is how integrated social media has become with the commerce that we engage in with our interpersonal relationships, with the way that we meet and maintain relationships. That’s an amazing change in a short amount of time for how we communicate as a species.”

Lampe expresses concern over the divisiveness that social media amplifies and explains the danger of filter bubbles, in which people only get news from sources that confirm their already-held beliefs. He notes that it has moved beyond disagreements to “fundamentally viewing reality differently” and that’s much more alarming.

“Social media is algorithmically fed, so it’s very easy to create a social media environment that only serves basically your personal interests, and unless you’re actively seeking contrary information to what you already believe, you’re just not going to see anything that countervails your personal beliefs. So unless we do something drastic soon, I think it’s going to create a disaster for our country,” he says.

It doesn’t mean that social media doesn’t have any positive elements, he notes, adding that it also isn’t something that will be going away anytime soon. There are still a lot of good outcomes, including the social support that individuals receive and the ongoing networking.

“It’s easy to forget how good social media still is, given all the negative things that we see these days, but it still is really good, it still is allowing people to communicate effectively, allowing them to organize, and engage in collective action,” he says.

Lampe and Sunstrum talk about the societal shifts in behavior as a result of wide-scale social media adoption, as well as moderation, trolling, and advocacy. They also explore the impact of the isolation caused by the COVID-19 pandemic on how people interacted on social channels. Lampe says that because people felt lonely during the pandemic and were seeking human connection, they used social media platforms in new ways.

Leveraging social media to engage with others online is valuable, Lampe emphasizes, but many remain skeptical to promote their work because of the negative tone often associated with social media. He suggests modeling good behavior because people will mirror it.

“You have to be responsible for what you put out there, and what you share, and doing your homework, and making sure that you’re sharing the thing that you think represents you well.”

Sunstrum adds that it is important to “listen more than you speak, and then walk away and make an educated, informed decision.”

Lampe explains the Center for Social Media Responsibility and how it is trying to create tools to make better, more informed, and more supportive decisions. Technology is never neutral, he says, because it always carries the agenda of who is using it — “the tool is equally effective in organizing a hate rally as it is a peaceful protest,” he says as an example. The sites also want to keep users on to show more advertisements, so the algorithms are working to keep eyes on the screen, he says. The only way to combat it, Lampe and Sunstrum agree, is “mindful browsing habits.”

In his own use of social media and in what he teaches his students, Lampe has been making it a point to support individuals who are experiencing harassment on platforms.

“If you’re in a room with people and the only thing you were doing was talking over everybody, that wouldn’t feel very positive and supportive of the people in that room, right? So why would you do that in a social media space? Instead, you want to make space for other people, you want to help amplify their voices. In normal conversation, we know that’s how you actually be a good supportive positive person, right? But because it’s so hard to see people’s reactions and there’s this fog of technology in social media, we just don’t do that as much in social media — but there’s a lot of opportunity to do it.”

Lampe’s parting words of wisdom are to change your perception of social media from it solely being an outlet for information to one of engagement.

“If you look at even the react buttons that we get across social media, they’re hearts, and laughs, and cries… So for anybody thinking about how you work in social media, stop worrying so much about just the information and start thinking about the emotional connection that you’re creating with people.”

LISTEN TO THE FULL CONVERSATION