The evolution of horror and Halloween happenings on campus: A #UMichChat recap

We’re LIVE from the Alumni Center with our panel of student and faculty guests for a special Halloween-themed #UMichChatJoin the conversation as we talk about the history of the horror genre, give you some tips on safe celebration, and highlight some fun Halloween attractions on campus. #UMichChat

Posted by University of Michigan on Wednesday, October 24, 2018

Why is the horror genre so enduring and why do people like to be scared to the point they’ll travel to a specific place to be freaked out?

During the October #UMichChat on Facebook Live, a panel of U-M faculty and students provided some answers to that, shared some of the haunted goings-on around campus this week, told some favorite scary stories, and discussed ways to celebrate safely.

Joining the conversation were English and Sweetland Center for Writing lecturer Gina Brandolino, who teaches courses on horror and hosts The Course of Horror blog; Shelby Flores, a graduate intern from the Center for Campus Involvement, who is helping with this year’s Haunted Bell Tower tour; Sarah Adams from the Theme Park Engineering Group, who worked on the Stranger Things Haunted House; and Princess-Amanda Onwenu, program assistant at Wolverine Wellness, who brought tips for safe celebrations.

Brandolino set the stage by tracing the history of horror stories. While some argue that the genre started with Frankenstein, she says it can be found in early English literature, such as Beowulf. 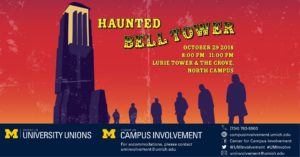 “John Carpenter, the director of the classic movie Halloween, has actually argued that horror goes even further back,” she said. “He’s said that horror started when a shaman told people around a campfire, ‘Let me tell you where horror is. Horror is out there, it’s the next tribe over, it’s the people who live across the river or on the other side of the forest. But wait, horror is also in here, it’s what’s in your heart.”

Horror can also be found around U-M’s campus this Halloween, including in the Lurie Bell Tower on North Campus. The Oct. 29 Haunted Bell Tower tour has a carnival theme this year, with creepy clowns and other characters.

What started with students in masks has grown to a richer, larger production in a setting that induces a little fear itself, Flores said.

The “Stranger Things” Haunted House is new this year, and will be held on Halloween at Palmer Commons. Adams noted that horror is a big part of theme parks, so it makes sense for the Theme Park Engineering Group to design, create, and host a haunted house. This one immerses participants in the middle of the popular Netflix series storyline.

“It’s going to be amazing and large and guests will get the experience that they are in the show as the story revolves around them,” she said.

These haunted houses are good examples of fun, safe Halloween events, said Onwenu. For students having their own celebrations she recommends good communication with neighbors to head off any issues, and downloading the Stay in the Blue app, which helps people track their 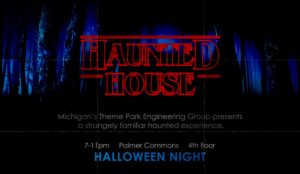 “We always tell people to be mindful about the noise level and size of the party,” she said.

The panel also took on the topics of how new media has created new ways of telling horror stories, and preferences for shock horror versus slow-buildup thrillers.

All agreed with Brandolino that there’s more to horror than telling scary stories. She noted that Toni Morrison’s novel Beloved is really about the legacy of slavery and the 1980s movie Poltergeist is about real estate and the idea of “owning” land.

Join us for the next #UMichChat on Facebook Live Nov. 15, where faculty experts will discuss healthy eating and body image.