The Impact and Role of Social Media at the Olympics 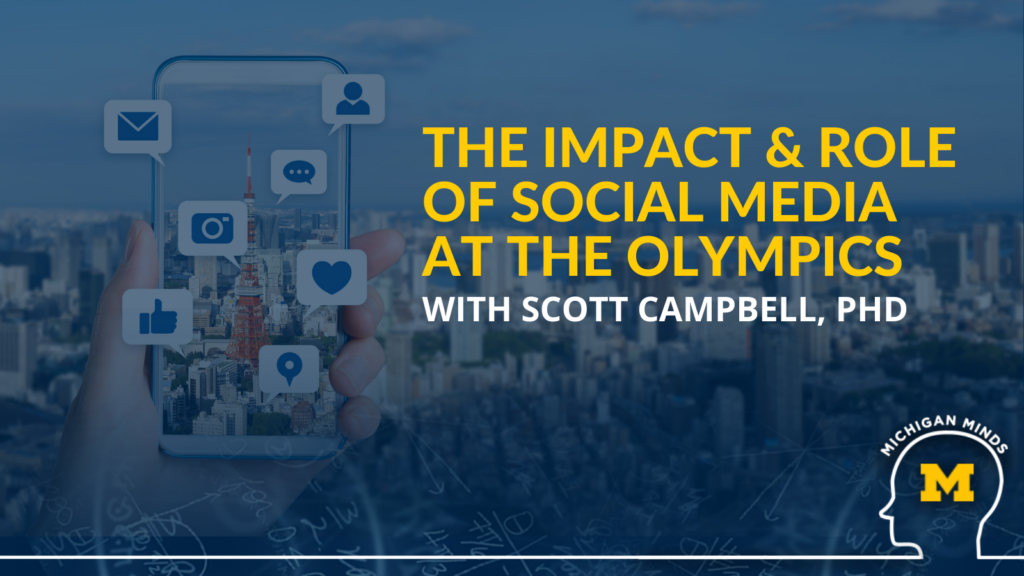 In this episode of Michigan Minds, Scott Campbell, PhD, Communications and Media Department Chair and Constance F. and Arnold C. Pohs Professor of Telecommunications, discusses the impact and role of social media at the Tokyo Olympics. He also talks about the presence that newer technologies like 5G and augmented reality will have on spectator events.

Campbell says that the way people experience the Olympics is continually evolving, through communications media like radio, television, and internet streaming.

“What’s going on right now is interesting, because the telecom companies are trying to get us to shift to a new fifth generation of infrastructure with mobile media, and what I’m paying attention to when it comes to the Olympics is the advertising of that media,” he says, adding that 5G is supposed to offer a new level of “low latency,” or more instantaneous processing of livestreamed data.

“They’re offering all kinds of new ways to connect with the Olympics so that spectators can take part through augmented reality and through virtual reality.”

He notes how social media has the ability to bring people from around the world right into the Olympics.

“We are intimately and immediately involved in gossip, rumor, updates, and news.”

The way that social media provides a platform for athletes to amplify their voices has a great impact on society, Campbell says.

“Olympic athletes and professional and amateur athletes can use social media to put themselves on a stage, to represent who they are, to represent their values beyond just their skills. Because they are role models,” he says. “It also makes them more vulnerable. These are young people and the dynamics on social media are so very hard to keep up with.”

After more than a year of living through a global pandemic in which individuals connected virtually rather than in person to follow public health and safety guidelines, Campbell believes people will be even more comfortable engaging through social media.

“The Olympics is a global event, and for people to participate in this together, it does take these kinds of resources. It does take this kind of media to bring people together at the same time, in the same place. And that’s what the Olympics is all about. So I do think we’re going to see more people living their lives in the digital realm. They’re more accustomed to it. It’s more acceptable,” he says.

Throughout the 2021 Tokyo Olympic events, and after, Campbell will be watching the mobile and social spaces to see how they progress. His prediction? More hybrid experiences of the Olympics where people have opportunities to be there, “immersed with digital information to enhance that experience.” He notes that the movement is toward visuals, and that will continue to grow.

Listen to the full conversation