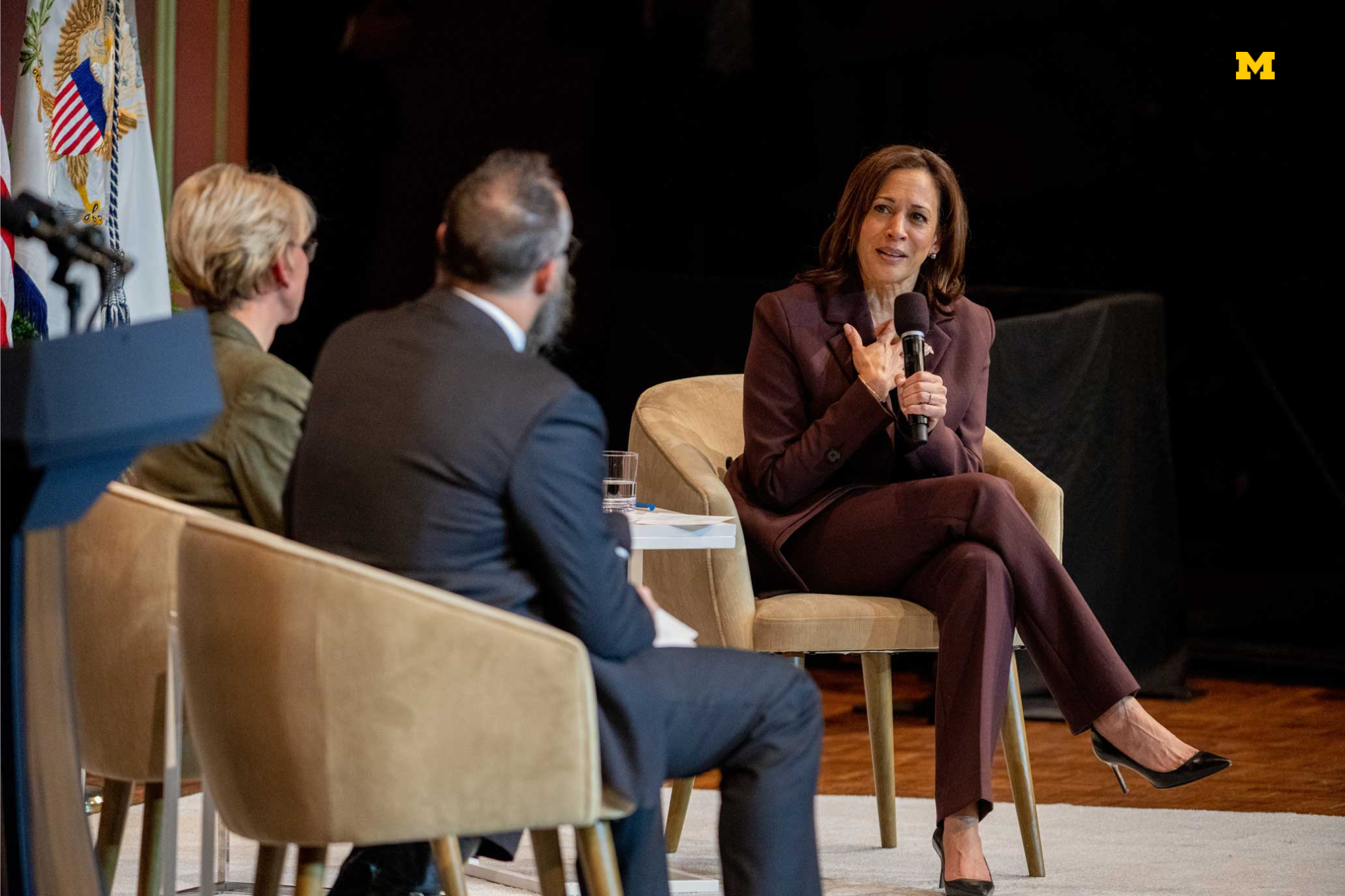 Lashaun Jackson, a U-M student studying environment and food studies with a focus on sustainable food systems and one of the co-presidents of the Student Sustainability Coalition, opened the program by telling everyone gathered in the auditorium that the time for action is now.

Jackson, who is also a facilitating member of the Student Carbon Neutrality Network and a leader of the Maize and Blue Cupboard’s Student Advisory Council, said that students are here to make climate action happen.

“We, as students, actually get to roll up our sleeves and do the work, right here on campus. Literally sticking our hands in the ground at the Campus Farm, growing food for each other and distributing it at the Maize and Blue Cupboard,” she said, adding that students also bring their voices to campus leadership and help local Ann Arbor, Ypsilanti, and Detroit communities.

“We, as just students, get to do this. Faculty, staff, university leaders, elected officials, and others in the audience — you get to support this change.”

“So, ‘just a student’ isn’t an excuse, it’s an opportunity to make the now our best achievement.”

“Madame Vice President, before you are brilliant scholars and instructors, selfless and committed staffers, and students whose passion, energy, and commitment will lead our footsteps in finding solutions for our greatest global challenges,” she said.

McCauley emphasized the importance of the work that students, staff, and faculty conduct every day at U-M, highlighting the more than 100 student organizations focusing on sustainability and the environment, the more than 7,000 Planet Blue ambassadors, and more than 800 sustainability-focused courses.

Dingell expressed her excitement to welcome Vice President Harris to the university and said, calling back to Jackson’s speech, that “not one of you is only a student.” She thanked the university community for their efforts and action and said it’s great to be at the University of Michigan because of all of the work is happening.

“Young people are being taught the skills and given the knowledge they need so [they] are going to come up with the creative ideas, to be the future. But there is also so much research taking place on this campus at all kinds of different schools on hydrogen, on autonomous vehicles, electric vehicles. You are going to develop the big ideas of the future and I’m going to beg you to keep up your advocacy, keep up your action, keep demanding that change.”

At the podium, Granholm thanked everyone in attendance for their interest and action and specifically thanked Jackson and all of the Michigan students who care so deeply about the environment.

“I bring my Michigan stories to work in my backpack every day. I know that we have the tools, the techniques, and the technologies to be able to tackle climate change now. We have the tools to be able to take advantage of the economy that can be created around clean energy, to build a just society, to undo the wrongs that have been perpetrated upon communities that have lived in the shadows of smokestacks…communities that have been left behind,” she said. “We can be the place that manufactures solutions for climate change.”

To students, Granholm said: “I hope you choose paths that lead you to take advantage of this clean energy opportunity to change the world.”

To a large round of applause, Granholm then introduced Kyle Whyte, George Willis Pack Professor; Faculty Director, Tishman Center for Social Justice and the Environment; Principal Investigator, Energy Equity Project, who is currently a U.S. Science Envoy and serving on the White House Environmental Justice Advisory Council and the National Academies’ Resilient America Roundtable. Granholm then welcomed VP Harris to a standing ovation. VP Harris, Granholm, and Whyte sat in chairs on stage at the Rackham Auditorium and began a question-and-answer conversation with the vice president.

VP Harris started by thanking everyone and cheering “Go Blue!” The first question posed to the vice president was how she was thinking about this moment.

“I’m really excited. I really am, and for so many reasons like what I am looking at right now. I think that we are at one of the most incredible moments of this movement—a movement that yes we are a big part of, but you all are going to be leading, and I’m so excited about it. I think of this moment as a moment that is about great momentum,” she said.

Harris said that much of the work by the administered is spurred by the activism and advocacy that has taken place.

Whyte, a member of a tribal nation with “deep roots in these lands and waters,” told VP Harris that he was inspired to follow the traditions of environment stewardship yet was “horrified” to learn that climate change was threatening the ecosystems. He asked VP Harris how her life experiences have shaped the way she approaches this work.

“First of all, professor, let me thank you for your leadership and your voice, and for being a voice of conscience for the nation,” she said. “So equity is—for my life work, and for our collective work and responsibility—a big issue. In order for us to address and achieve equitable outcomes, we also have to be candid and clear about history.” She also discussed the intersection of the climate crisis and public health, and also the issues of education and educational opportunity and how it also intersects with the climate crisis. “The intersections must be front and center, and always at our center must be the communities that are directly impacted.”

Granholm asked the vice president what technology excites her for a sustainable future, to which she responded that she is looking forward to electric school buses because 25 million children a day in the US go to school on diesel-fueled buses and they are inhaling toxic fumes, as well as the drivers and everyone else in education ecosystem. She said that it ties into her comments on the intersectionality of public health and education with the climate crisis in terms of how it might impact a child’s ability to learn. She also asked the audience to give a shout out to the leadership of union labor in making electric buses in America.

Referring to what the movement means to growing the economy, VP Harris said it is about the creation of new industries. “We are building a new clean energy economy – it’s new,” she said, adding that there will be new jobs and training for not just electricians and pipefitters but also human resource specialists, communications managers, and many others from myriad disciplines.

Whyte asked how students and other young people can get involved to take actions. VP Harris said that in every way they can. “Anything that you are doing right now in terms of your studies and your passions connects to this issue – anything and everything you are doing.”

Climate work includes everything that one might do whether it’s advocacy, researching, or working with communities, VP Harris said. “It’s about the work people can do to remind people of their rights; they have a right to water and clean air.”

She continued that it is important to inform others about sustainability efforts as well: “Whether you are studying hospitality or engineering or communications, that will relate to this work. There is the work about letting people know what is happening right now.”

VP Harris said students and young people have a charge to lead this movement and have stories that they can uniquely tell. “Tell those stories. Talk with your peers. Talk to your friends and relatives through social media to help them get excited about all of the opportunities that are going to open up amidst a crisis.”