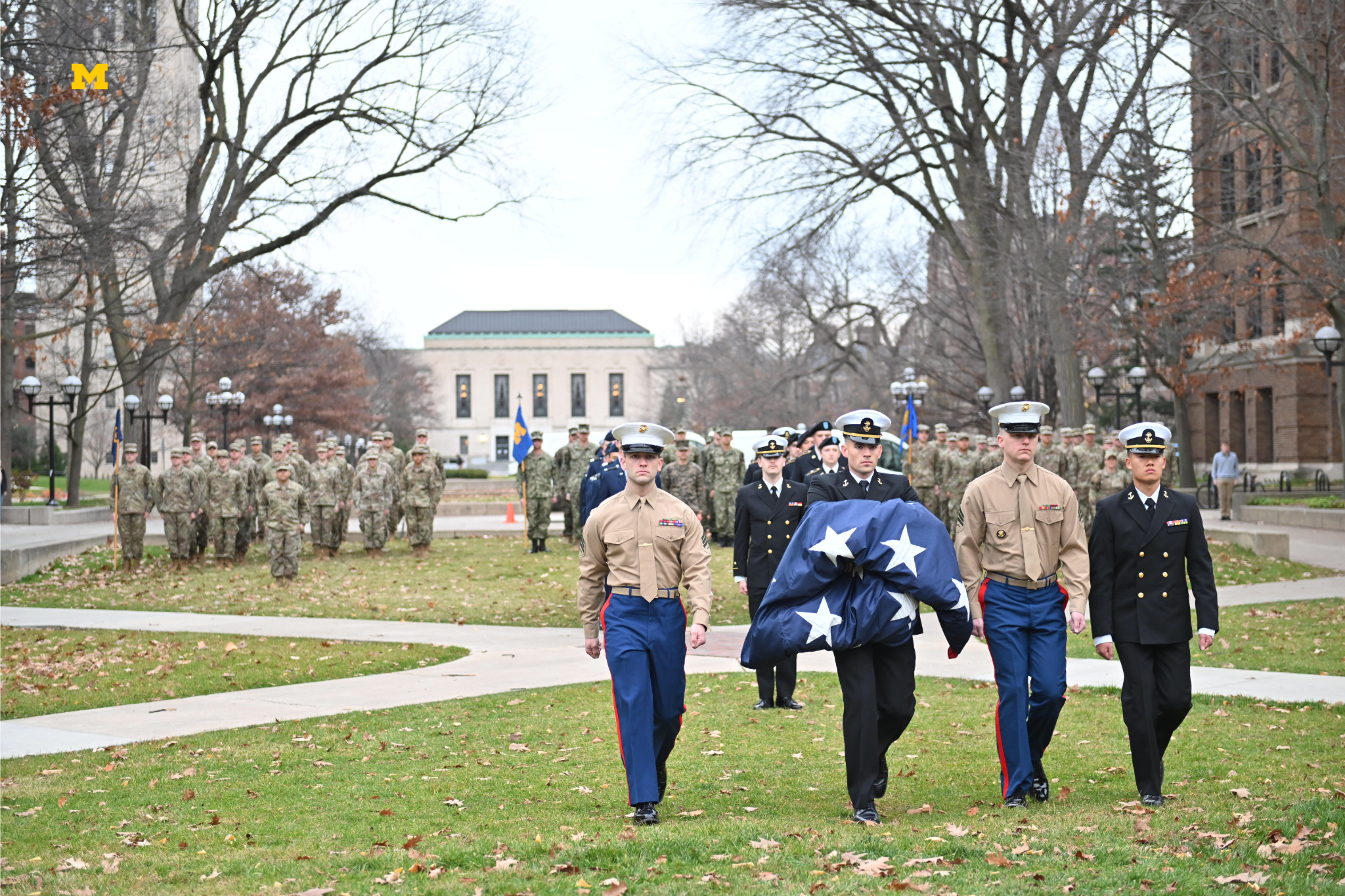 The University of Michigan Army ROTC program trains students to become second lieutenants in the US military. U-M ROTC Lieutenant Colonel Tom Church and Master Sergeant Tom Hance joined Michigan Minds to talk about ROTC and the cadet experience, and also to discuss what Veterans Day means to them and how the campus community can honor veterans.

Lt. Col. Church is a professor of military science with the Wolverine Battalion and the chair of the Army Officer Education Program. He graduated from U-M with a Bachelor of Arts and commissioned from the U-M ROTC program, and has since held numerous roles throughout the past 19 years. He was born in Kentwood, Michigan, which is near Grand Rapids. He is also a member of the Match-E-Be-Nash-E-Wish Band of Pottawatomi Indians, also known as the Gun Lake Tribe.

M SGT Hance is the senior military science instructor for the ROTC program. In January 2023, Hance will hit 20 years active duty. Originally from New York City, he joined the military soon after the 9/11 attacks. In his role at U-M, he instructs warrior tasks and battle drills and prepares competitive cadet teams for events.

“Ultimately, the Army ROTC is a place where we train, mentor, and inspire college students to become second lieutenants in the US Army. That is our mission. It is an opportunity for us to provide students, in exchange for a paid college education, a guaranteed, post-graduation job, and then they commit to serve after that. I think another interesting point to describe here is that once commissioned as an Army second lieutenant, they have an opportunity to go into three different branches of the US Army, either active duty, Army National Guard, and then the Army Reserve,” Church says.

Church, having previously been a cadet at U-M, speaks from experience on what it is like for students. Cadets are just like any other student, he emphasizes. They attend classes, and the ROTC program is like any other class with two hours of time throughout the week and a two-hour lab. They also spend additional time each semester at Fort Custer near Battle Creek, Michigan, to train.

“Our cadets are just like you at the University of Michigan. They strive to be the leaders and best while preparing to serve our country as officers in the Army.”

There are numerous events, clubs, and the color guard that is a part of a tri-service — Army, Navy, and Air Force. The campus community can see them at home football and basketball games raising and lowering the flag. Additionally, the Ranger Challenge team is the ROTC’s own varsity sport with a rigorous training regimen.

“The one unique thing is it gives cadets an opportunity to be placed in leadership actions or activities on a consistent basis where other students might not have that opportunity. In the Army, one thing I like to say is sets and reps. Every time you get a chance to be in a leadership role and doing it often and more often, that prepares you to be more confident and more collected and we’re doing it in a safe environment here before they have to go and do it for real,” Church says.

The ROTC trains each week at the Nichols Arboretum with rubber ‘dummy rifles.’ Hance says that some people are concerned when they see them on campus, but he wants to ensure everyone knows that they never carry weapons during training and are always training in safe manners. “That’s a common misconception. We’re never doing anything dangerous out there,” he says.

In recognition of Veterans Day, which is Friday, Nov. 11, 2022, the ROTC tri-service color guard will be on the Diag to conduct a ceremonial flag raising at 8:00am and a flag lowering at the Law Quad at 5:00pm.

As service members themselves, they also describe what Veterans Day means to them.

“Personally to me, Veterans Day is a way of recognizing America’s sons and daughters who selflessly decided to raise their right hands and take the oath to protect this great country, with the understanding of what was at stake in doing so. That’s my take on Veterans Day,” Hance says.

“I think that part of taking that oath and committing to something and being part of a team or an organization that’s geared toward a common goal. And it’s all about remembrance too and not forgetting… I mean, it’s not Memorial Day, but it’s an opportunity to remember the living service members that we have that are among us. I mean, there’s a sizable population of veterans just in Southeast Michigan and on this campus too. So it’s just a great opportunity to kind of slow down for a day and think about service to something that’s greater than yourself,” Church says.

At the U-M Football game at the Big House on Saturday, Nov. 19, there will be a special event with the Veterans Organization of Church’s tribe, the Match-E-Be-Nash-E-Wish Band of Pottawatomi Indians, also known as the Gun Lake Tribe, from Shelbyville, MI. Church explains that the Match-E-Be-Nash-E-Wish Ogitch-E-Daa Society is a Native American Veterans organization formed to provide traditional honors of Annishinabek Ogitch-E-Daa. There will be several members joining the U-M tri-service ROTC Color Guard to present two Eagle Staffs with the raising and lowering of the US flag at the game.