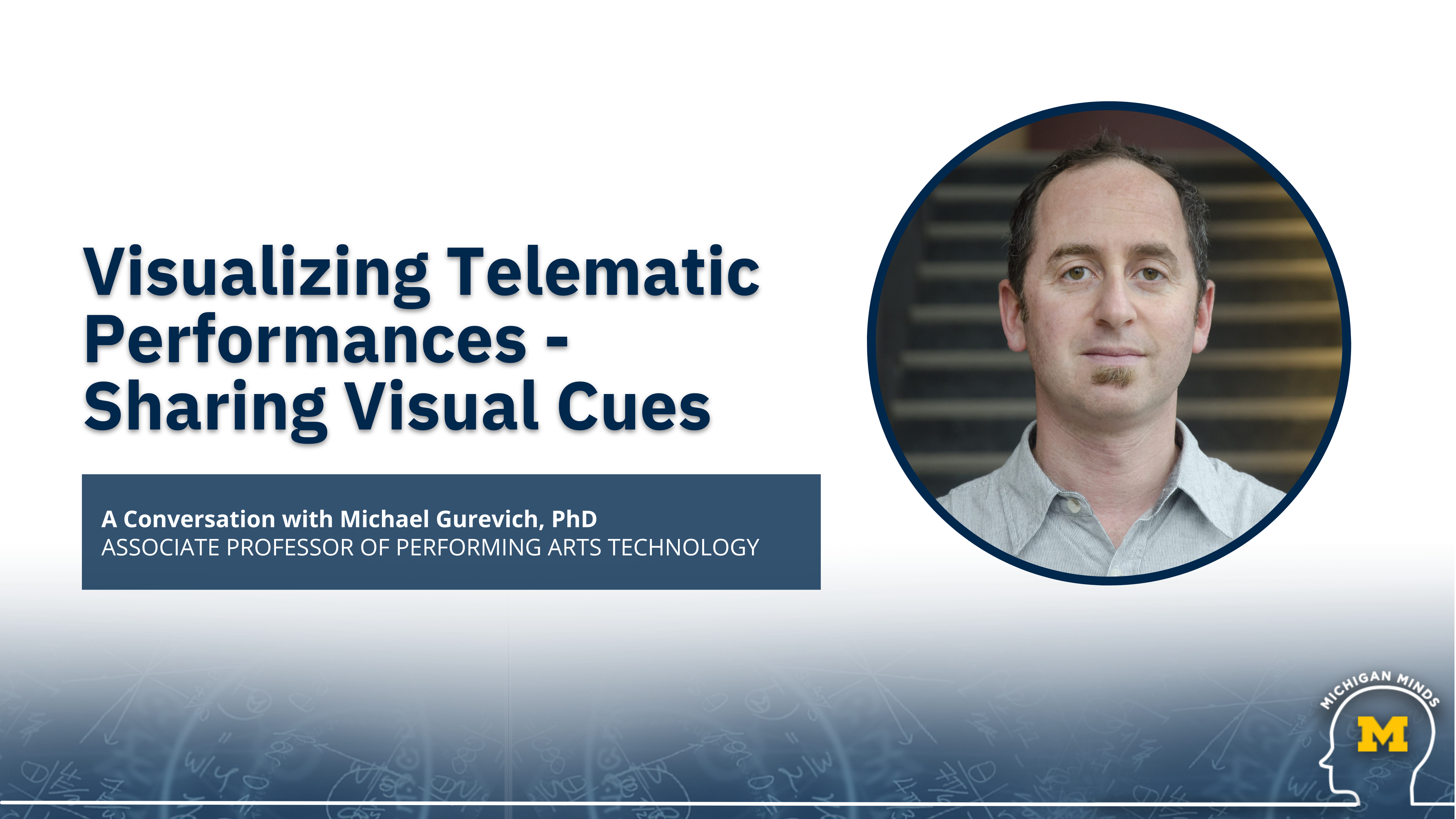 Live music can be experienced in many different ways. Telematic music performance offers a unique way for musicians to play together in real-time while not being in the same physical location.

Michael Gurevich, PhD, associate professor of performing arts technology, joined Michigan Minds to discuss his Arts Initiative-funded project Visualizing Telematic Performance, some of the experiments undertaken, and how the pandemic affected the project.

“Telematic music performance has been around for about 20 years or so in practice. I guess people have theorized about it for a long time before that. But about 20 years ago, people started experimenting with using advanced networking technologies to be able to play music together with audio, with sounds sent over the internet, where the performers could be in different geographic locations,” says Gurevich.

“People have been experimenting with this ever since then in different ways. There have been really large-scale productions of operatic and symphonic works with musicians all across the world and small-scale performances of people jamming together in their living rooms.”

Gurevich discusses how previous experiments have provided insight into understanding the subtle gestures musicians make, and how video was not the best option to continue this work.

“Another technology that has become widespread that’s enabled our research is the use of infrared motion capture….We’re using the same technology. We’re not animating digital characters, but we’re using that technology too, in real time, to capture the performers’ movements.”

“All of a sudden there’s this real sense of urgency to what we were doing. People came up with creative ways to make music together, to fake playing live,” he says. “Usually, they would just have a metronome playing and everyone would record themselves to the metronome and then reassemble the parts of the piece later and it was better than not having music for a while, but it doesn’t really capture the magic of live performance. So, this idea of ‘We want to be able to really play with each other for real and have it feel real’ was really timely for this project and it gave it really a sense of urgency and momentum.”

Gurevich also sheds light on how the project progressed from ideation and research to completion. Bringing together faculty, professional musicians, and students from music and engineering, they made the decision not to do isolated research. “We wanted to explore these questions around movement, physical presence, and gesture in telematic performance by doing it, by making things and trying them in performances.” The next stage of the project is a series of workshops and performances. Two events were previously held and provided insight and feedback on their simulated telematic performance. The third public workshop and performance will be a real telematic music performance in collaboration with the University of Virginia held on December 3. This performance will include live musicians and robots at both universities.

As for the future, Gurevich is thinking about the theatrical implications of this research.

“I want to also just express my gratitude to the Arts Initiative for facilitating this work because we couldn’t have done it without that support. This project is ongoing and it’s going to morph and take different forms and enter different phases, but we see this as a long-term proposition that was really kickstarted by the Arts Initiative. We’re really grateful to have been able to get the ball rolling.”