We Hold These Truths: Living Up to Our Declaration 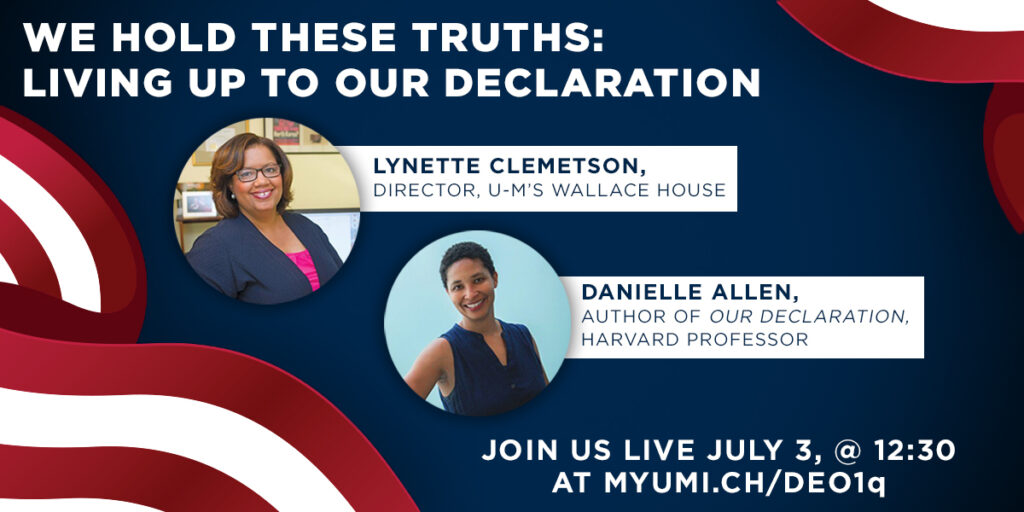 The University of Michigan will hold the first Democracy Cafe this Friday as part of the Democracy & Debate Theme Semester launch week, which will closely examine the Declaration of Independence.

The inaugural event, We Hold These Truths: Living Up to Our Declaration, A Conversation with Danielle Allen, will be held Friday, July 3 at 12:30 p.m. via Zoom and livestreamed on U-M’s YouTube channel.

Lynette Clemetson, the Charles R. Eisendrath Director of Wallace House, will host the discussion with Danielle Allen, a renowned political theorist, Harvard professor, winner of the John W. Kluge Prize for Achievement in the Study of Humanity, and author of Our Declaration: A Reading of the Declaration of Independence in Defense of Equality.

They will have a timely conversation about living up to the truths and promise of the Declaration of Independence, and how this seminal document applies to the social movements occurring across the nation to combat systemic racism. Clemetson and Allen will talk about the role of equality and how interpretations of the document, which is often considered synonymous with freedom, have evolved throughout history. They will also examine the importance of the language of the document and dissect its meaning; and Allen will also discuss what led her to write the book.

Allen recently won the 2020 John W. Kluge Prize for Achievement in the Study of Humanity, a $500,000 award administered by the Library of Congress that recognizes work in disciplines not covered by the Nobel Prizes. She is known for work that ranges from close readings of historical texts to broad efforts like the Democratic Knowledge Project, a K-12 educational platform aimed at developing skills needed for civic engagement. Allen will lead an initiative called “Our Common Purpose,” aimed at engaging educators, the general public, and political leaders in promoting what she calls “civic strength.”