What the ‘Lyme wars’ Can Teach Us About COVID-19 Controversies 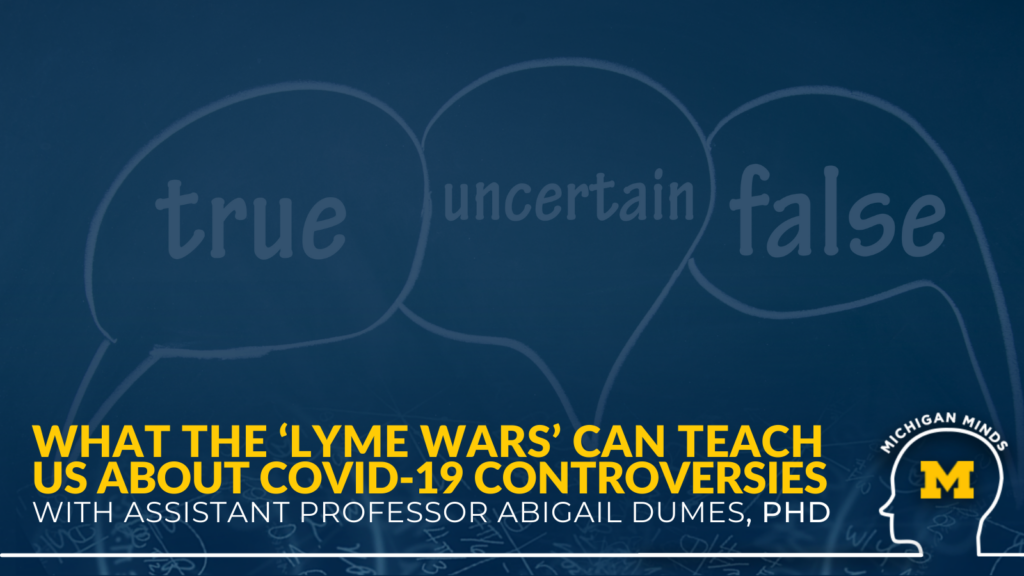 This episode of Michigan Minds features Abigail Anne Dumes, PhD, an assistant professor at the University of Michigan’s College of Literature, Science, and the Arts Department of Women’s and Gender Studies. Dumes is also a core faculty member of the Global Feminisms Project, an organization that collects and archives interviews with feminist scholars and activists from around the world.

Dumes’ ongoing research explores the relationship among gender, contested illness, infectious disease, and environmental health in the United States and engages with scholarship in medical anthropology, feminist science studies, and environmental studies. Her recent work examines the controversy regarding how to diagnose and treat Lyme disease, and what it can teach us about the relationship between contested illness and evidence-based medicine in the US. Her work has been published by Duke University Press in a book Divided Bodies: Lyme Disease, Contested Illness and Evidence Based Medicine.

Referencing her recent article for The Conversation, Dumes explains, “Lyme’s controversy really hinges on whether the bacterium that causes lyme disease can persist beyond antibiotic treatment in the form of what’s called chronic lyme disease. Since it was discovered in Lyme, Connecticut in 1982, disagreement over chronic lyme disease has resulted in what is often described as Lyme’s two camps.”

Dumes says that on one side of the divide, proponents of Lyme’s mainstream standard of care argue that Lyme is easily diagnosed and treated. They don’t recognize the biological basis of chronic lyme disease or the persistence of active infection beyond standard antibiotic treatment. On the other side of the divide, proponents of the self-described ‘Lyme literate camp’ argue that diagnostic tests are often unreliable and the chronic Lyme disease should be treated with extended courses of antibiotics.

As both Lyme disease and the COVID-19 virus are complex issues, Dumes highlights multiple ways in which the Lyme debate relates to the coronavirus pandemic.

“On the surface, there doesn’t seem to be much in common between Lyme disease and school reopening during COVID, but if you dig deeper, several interesting similarities emerge. First, they are both intensely polarizing issues with little middle ground — you’re either on one side or the other. Second, they’re complex issues that are a nexus for a range of other controversial issues. While Lyme disease encompasses other controversies, such as the Lyme vaccine, geographic distribution of Lyme, and how it’s transmitted, school reopening brings together controversies about masks, vaccines and public health responses to coven more broadly.”

Dumes mentions the interesting observation that she has noticed over the past year and a half, which is the disagreement about school reopening and how it has led to a range of accusations of what’s often called epistemic trespassing— which is stepping outside of one’s areas of expertise and attendant calls to stay in one lane. “I think widening the lane to include multiple perspectives and building coalitions across lanes could lead to a more holistic and more complete understanding of school reopening,” she explains.

LISTEN TO THE FULL CONVERSATION