In this episode of Michigan Minds, we talk to Lola Eniola-Adefeso, University Diversity and Social Transformation Professor of Chemical Engineering at the College of Engineering. She discusses a paper she recently co-authored examining the disparities in health research funding between white and Black researchers of similar academic achievement and recommending how to eliminate that disparity.

The paper, written by  a network of women deans, chairs, and distinguished faculty, notes that white biomedical researchers get funded twice as much as Black researchers, despite equal levels of achievement and accolades. It was published in the journal Cell.

“We have a national group of biomedical engineering faculty and collectively we were talking through the pain of the [2020] summer . And it didn’t take us long to recognize that these inequities that exist on the streets are actually linked to our roles as faculty members in biomedical engineering. So we decided to form a working group to try and dig into those connections. It didn’t take long for this idea and issue of NIH funding disparity to rise up to the top, so we decided to write something about it,” she says. 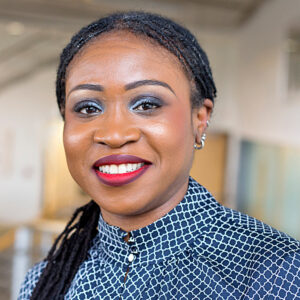 In the paper, the authors recommend steps that funding agencies can take to eliminate or mitigate the disparities, including developing policies that will achieve racial funding equity, diversifying proposal review panels, and incorporating diversity into scoring criteria.

“We need to be able to leverage the full diversity of our population. And right now we are leaving our Black population, our Brown population, our Indigenous population out of science and engineering,” Eniola-Adefeso says.

There are consequences of stark funding disparities, including fewer Black scientists being interested in entering the field because they aren’t seeing themselves represented.

“Diverse biomedical researchers bring to the table diverse problems that they want to study, and that allows us to cover all of the ailments and issues that affect all Americans.

“If we are not diversifying our faculty pool, there is direct data that shows that we struggle with training and graduating diverse student populations because people tend to go into career fields where they see people that look like them succeeding,” she says.

Eniola-Adefeso says that the funding inequities contribute to the distrust of medicine in Black communities. She references the 40-year-long Tuskegee experiment and how important it is to understand the roots of the Black community’s wariness of the nation’s medical system.

“We’ve worked hard over multiple decades to pull back or unwind that distrust, but we have not made the progress that we could have made because of this lack of diverse Black scientists at the forefront of medical research, medical technology, and medical innovation. If a group of people are already likely to be suspicious of our medical enterprise, and then they continue to not see people that look like them at the forefront of technology, you could see how conspiracy theories will take hold,” she says.

The importance of diversity in STEM programs cannot be overstated, according to Eniola-Adefeso, and the easiest way to expand diversity in the pipeline is to provide diverse role models for them. Even with outreach to Black students to tell them that science and engineering is a field for them, if they aren’t seeing the visual representation, many of them won’t consider it.

“That’s why we focused this piece on funding Black faculty members,” she explains, “because you need them to not be spending so much of their time writing grants. Because they are important to this desire for us to have a diverse classroom of students, giving them equal access to the science and engineering degrees.”

She hopes that people will see how problematic the  disparities are and will be energized to help address the issue.

“This is a problem for all of us. If you deeply believe in what we’re doing with a biomedical research enterprise, then we all should be screaming and crying to get equitable funding to Black scientists.”

Eniola-Adefeso adds that their work focused on Black scientists because that is the data they had access to, and it is likely this disparity impacts other underrepresented scientists as well.