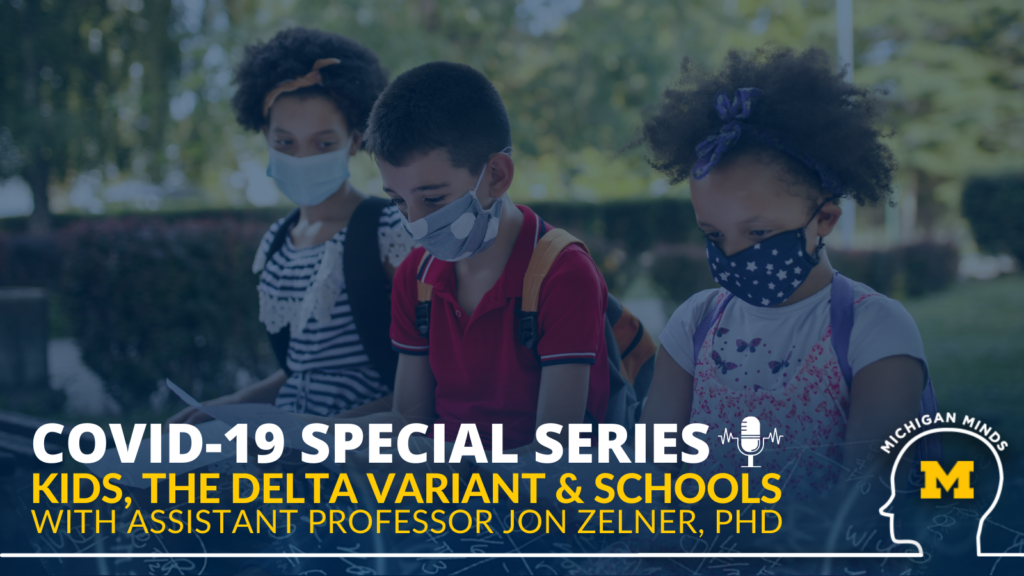 As the COVID-19 pandemic continues, many families have questions and concerns about sending their children back to school and are wondering how this academic year will differ from last year in regard to the virus.

Jon Zelner, PhD, assistant professor of epidemiology at the U-M School of Public Health, says the biggest change from last year is the availability of vaccinations. He joined the Michigan Minds podcast for a special series on the COVID-19 pandemic to discuss what we know about the virus, the concerns the delta variant is causing, and the ability of schools to hold in-person classes safely.

“Things have shifted a lot, much of it in a very positive direction, but obviously the emergence of things like the delta variant have kind of put us back on our heels a little bit. The biggest thing that’s changed is that many—or most, depending on the district you’re in—of the adults who are in the classroom or in a school building are going to be vaccinated at this point,” Zelner says.

School-based transmission remains a concern for districts, particularly since a vaccine has not yet been authorized for children under 12. But there are still many effective mitigation measures that can be implemented to slow the spread, including consistently following public health guidelines, and implementing additional measures like keeping kids in smaller groups in the classroom and wearing masks.

But it all comes back to the vaccine. “I think the single most effective thing is vaccination for staff and teachers,” he says.

Zelner understands the uncertainty that parents are facing; he has two young children himself. Families want a degree of predictability for the school year, which he says all goes back to the importance of vaccination for anyone who is eligible.

“Vaccination for anybody who can get it as a means of preventing things from happening within the [school] building, that’s the first line of defense,” he says. Everything past that is really just trying to slow things down, should [spread] occur.”

Even though they all lived through the same pandemic, each student’s experience is unique. The pandemic also exposed underlying inequities, which Zelner has researched extensively,  exploring some of the differing situations that families have faced these past 18 months.

He says that from March to July 2020, there were high caseloads and “enormous inequities” among families of frontline workers who were “disproportionately of lower socioeconomic status, disproportionately people of color, particularly in Michigan, who were experiencing the brunt of the risk.”

As the summer progressed, he says, things appeared to be calmer, but cases were still not declining as quickly as hoped.

“People were rushing back out into the world and rates were going up, and on some level it looked like the inequality in infection was going down. But if you look at the numbers, what you actually see is that folks who were at lower risk in that first phase were at greater risk in the second phase,” he explains.

“One thing I try to emphasize is that the damage is already done. The people who died in March, April, June, July of 2020 — you’re not going to be able to bring those people back. And the fact that they died early on reflects those sort of structural inequities that have made this pandemic what it is. So just because we see things getting better over the course of this whole event in terms of inequality doesn’t mean that we’ve solved any problems.”

He says that these are important things to keep in mind as children return to classes because their emotional and social experiences have been so varied.

Zelner adds that he hopes everyone realizes that ultimately, the arrow is now pointing in the right direction to get out of the pandemic, even if it’s not going as fast or as straight as was hoped. He encourages everyone to be optimistic but continue to practice caution, especially in transitioning back to classroom settings.

Listen to the full conversation