Mathematics of scale: Big, small and everything in between 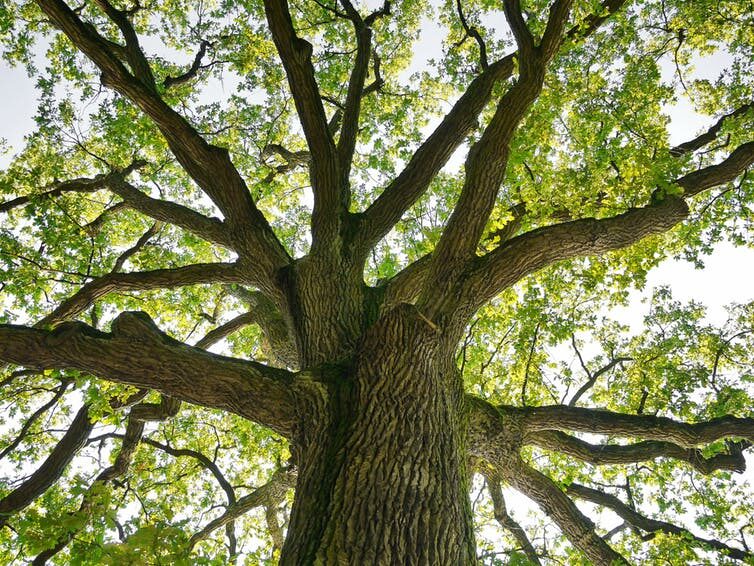 Breathe. As your lungs expand, air fills 500 million tiny alveoli, each a fraction of a millimeter across. As you exhale, these millions of tiny breaths merge effortlessly through larger and larger airways into one ultimate breath.

These airways are fractal.

Fractals are a mathematical tool for describing objects with detail
at every scale. Mathematicians and physicists like
me use fractals and related concepts to understand how things change going from small to big.

You and I translate between vastly different scales when we think about how our choices affect the world. Is this latte contributing to climate change? Should I vote in this election?

These conceptual tools apply to the body as well as landscapes, natural disasters and society.

In 1967, mathematician Benoit Mandelbrot asked, “How long is the coast of Britain?”

It’s a trick question. The answer depends on how you measure it. If you trace the outline on a map, you get one answer, but if you walk the coastline with a meter stick, the result is quite different. Anyone who has tried to estimate the length of a rugged hiking trail from a map knows the treachery of the large-scale picture.

That’s because lungs, the British coastline and hiking trails all have fractality: their length, number of branches or some other quantity depends on the scale or resolution you use to measure them.

The coastline is also self-similar – it’s made out of smaller copies of itself. Fern fronds, trees, snail shells, landscapes, the silhouettes of mountains and river networks all look like smaller versions of themselves.

That’s why, when you’re looking at an aerial photograph of a landscape, it’s often hard to tell whether the scale bar should be 50 km or 500 m.

Your lungs are self-similar, because the body finely calibrates each branch in exact proportions, making each branch a smaller replica of the previous. This modular design makes lungs efficient at any size. Think of a child and an adult, or a mouse, a whale. The only difference between small and large is in how many times the airways branch.

Self-similarity and fractality appear in art and architecture, in the arches within arches of Roman aqueducts and the spires of Gothic cathedrals that mirror the forest canopy. Even ancient Chinese calligraphers Huai Su and Yan Zhenqing prized the fractality of summer clouds, cracks in a wall and water stains in a leaking house in 722.

Self-similar objects have a scale invariance. In other words, some property holds regardless of how big they get, such as the efficiency of lungs.

In effect, scale invariance describes what changes between scales by saying what doesn’t change.

Leonardo da Vinci observed that, as trees branch, the total cross-sectional area of all branches is preserved. In other words, going from trunk to twigs, the number of branches and their diameter change with each branching, but the total thickness of all branches bundled together stays the same.

Da Vinci’s observation implies a scale invariance: For every branch of a certain radius, there are four downstream branches with half that radius.

Earthquake frequency has a similar scale invariance, which was observed in the 1940s. The big ones come to mind – Lisbon 1755, San Francisco 1989 – but many small earthquakes occur in California every day. The Gutenberg-Richter law says that earthquake frequency depends on the size of the earthquake. The answer is surprisingly simple. A tenfold bigger earthquake occurs roughly one-tenth as often.

Society and the power law

A 19th-century economist Vilifredo Pareto – famous in business school for the 80/20 rule – observed that the number of families with a certain wealth is inversely proportional to their wealth, raised to some exponent. Pareto measured the exponent for different years and different countries and found that it was usually around 1.5.

Pareto’s wealth distribution came to be known as the power law, ostensibly because of the exponent or “power.”

The sizes of fortunes then are akin to the sizes of tree twigs or blood vessels – a few trunks or large branches and exponentially more tiny twigs.

Pareto thought of his distribution of wealth as a natural law, but many different models of social organization give rise to a Pareto distribution and societies do vary in wealth inequality. The higher Pareto’s exponent, the more egalitarian the society.

From understanding how humans are made up of tiny cells to how we affect the planet, self-similarity, fractality and scale invariance often help translate from one level of organization to another.